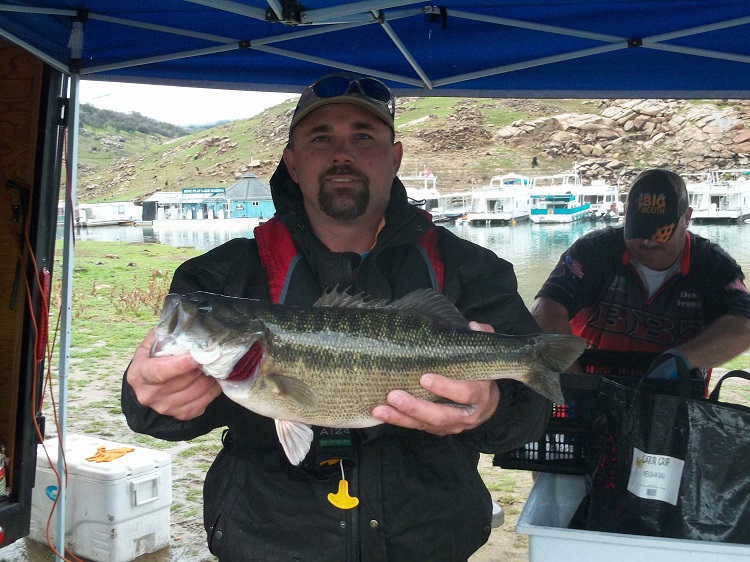 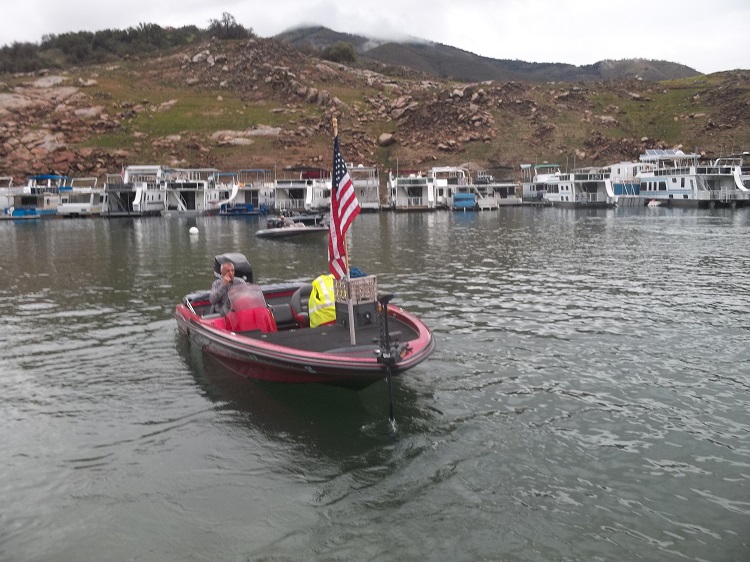 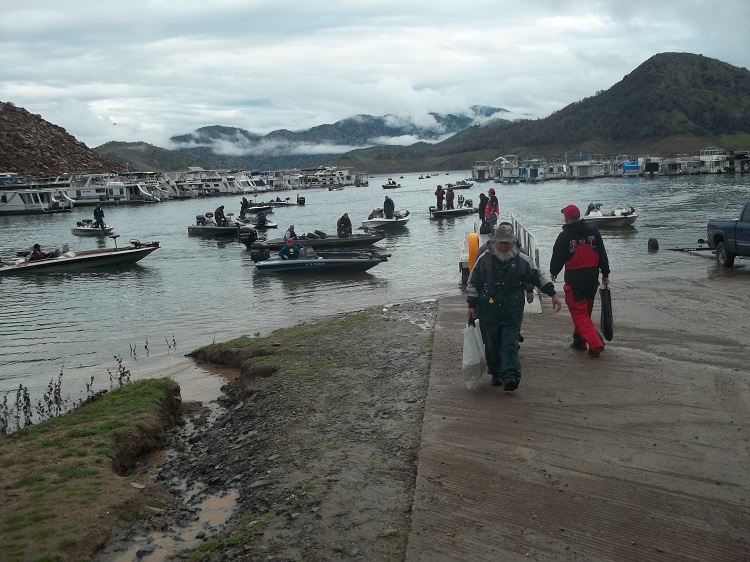 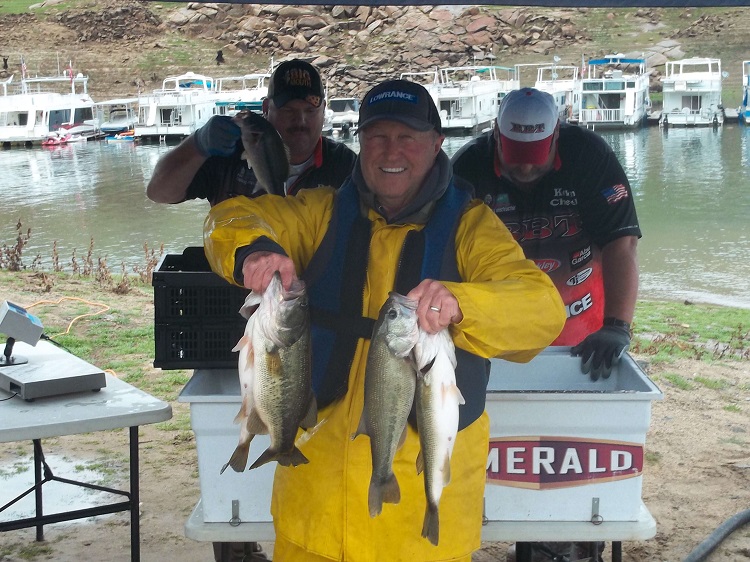 The second tournament of the Central Valley Region of the Best Bass Tournament Trail was held Saturday, February 7, 2015 at Pine Flat Lake with a field of 36 boats - one in the small boat division.

Everyone was so excited about the rain that even the steady showers  did not dampen the spirits of the anglers that showed up to fish.

Looking for a dry level place to park for registration was the first item on our agenda.

Finding a place where we could hold registration and the weigh-in was the main thing on tournament director Kevin Cheek's mind.  A decent place next to the water's edge made good for both activities.  The trailer doors were opened and the rain was falling.  The pop-up was opened and set-up, tarps placed over the wood trailer doors, tables for paperwork, coffee and homemade goodies were set-up under the pop-up.  We were on sand and mud; so another tarp was laid down on the ground to help keep things as dry as possible.

By 4:00a.m. we had anglers showing up to register.

There were familiar faces, faces from prior years and new faces as well.  Registration went well and before we realized, it was time for the blast off.

BLAST OFF
Kevin took his bull horn and  paperwork and headed down to the boat for the blast off.  He went over BBT Rules, off-limits and set-up for two weigh-in flights.

By 9:00a.m. the paperwork was balanced and the awards were ready for the afternoon.  We were then ready to sit back and take a snooze.  Oh well,  the thought was good; but there was other things to do.

By noon it was time to charge the scales and set up the weigh-in station.  Because the wind was of big concern, we were unable to put up banners.  Earlier in the morning during registration the pop-up tried to blow away twice.  Kevin had to tie the pop-up to the trailer and to an angler's pickup.  No matter what the weather the tournament must go on!!!

Our small boat was the first boat to return for the weigh-in.  One by one the boats started to come in and before long there were several boats waiting to bring their fish up to the scales.

This only confirms the anglers remarks on how hard the catch was.  We had hoped to see a few big pigs, but there is always next month.

The scales were called closed by Kevin at 3:40p.m.

It was now time to tear down and head up to the parking lot for the awards.  When we arrived it was great to see so many boats and anglers waiting for the awards.  The sportsmanship and support that these anglers showed each other was admirable.

While we were setting up for the awards Diamond Nuts and left over homemade cookies and brownies were set out for the anglers and their families to eat and enjoy.

CHAMPIONS
Dean Miller and Darrell Masterson both from Tulare walked away with the first place trophies.  They brought in five fish weighing 12.86 pounds.  The second place Big Fish was among the fish that they brought in.  This fish weighed-in at 3.86 pounds.  Dean and Darrel left the Lake with $1,630.00 in winnings.  These anglers used plastics and swim baits to catch their fish on and they fished the dam and river.  As low as the lake was the river could have been the whole Lake.  Great job anglers!

Second place went to the team of Rod Burns and Denny Bowlin both of Fresno.  These anglers weighed in five fish for a total of 11.20 pounds.  They were in all the options and took home $785.00 for eight hours of fishing.  Rod and Denny used Yamamoto twin tail lures while fishing Windy Gap and the river.  Methods fished were jigs, worms and swim baits.  These anglers would like to thank their wives Kim and Juanita for all their support and allowing them to fish.  Way to go anglers!

THIRD PLACE
The team of Pete Rodriguez and Carlos Ariaza, both of Visalia took third.  Pete and Carlos brought-in five fish for a total of 10.53 pounds.  They were in all of the options and took home $525.00.  These anglers fished by the dam with jigs and drop shots in 40 to 50 feet waters.  Pete and Carlos would also like to thank their wives Maria and Lupe for their support and understanding.  Keep up the good work!

First place Big Fish went to the team of Joseph Slavik and Ed Hinojosa.  Their winning fish came in with a weight of 4.19 pounds and a received a paycheck in the amount of $360.00.  Great job.

Our next tournament for the Central Region will be held at Pine Flat Lake on Saturday, March 7, 2015.  Again we look forward to having all you anglers show up for a good day of fishing .  Bring your friends out with you to enjoy in the fun and sportsmanship.