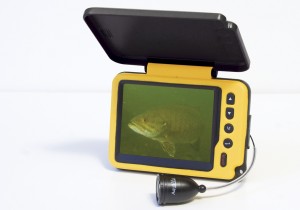 “Original.” New and unusual. Inventive. A first form from which varieties arise and imitations are made . . . Perhaps old Noah Webster was a fisherman, for how else can you explain his exact description of Aqua-Vu—the first angler-friendly underwater video camera in history and the pioneers of an entirely new electronic category?

When those first revolutionary anglers “virtually” immersed themselves in the underwater world over fifteen years ago, they never imagined the stunning, never-before-seen views of fish and the aquatic terrain that would appear on their vibrant Aqua-Vu displays. They learned. They discovered. They revealed new secret fishing spots that for generations had lain unknown and untouched.

All these years later, with numerous innovations, patents and breakthrough techno-features to their credit, Aqua-Vu continues to spearhead the category—in quality, clarity and imagination. In fact, this winter, the original camera company is back in a big (or make that “Micro”) way.

As lake surfaces freeze, ice anglers will be venturing forth, reaching into their coat pockets to unleash the coolest new camera system of this or any generation. Beginning today, in fact, thousands of anglers from across the continent will converge on ice fishing’s epicenter—Minnesota’s Twin Cities—to behold the sport’s sweetest accoutrements at the 20th Annual St. Paul Ice Fishing Show.

Among a host of leading ice companies—heavy-hitters like Frabill, St. Croix, Humminbird and others— the always-anticipated Aqua-Vu booth will be emanating the warm glow of colorful underwater monitors. Positioned in the palms of anxious attendees will be the new smartphone-sized Micro AV Plus DVR.

Imagine a full-power camera system that colorfully surveys the fish-zone on a compact hand-held device. The Micro AV Plus DVR is a wonderfully portable and practical fish-finding unit that inspects and digitally records your hotspots. To capture those never-before-seen underwater events, a stealthy color CMOS camera surveys a wide 150-degree high-resolution view of the terrain—all in an optics package that’s smaller than a shotglass. It’s even capable of quickly uploading the viral videos to your computer.

From here forward, you may want to store your iPhone in a separate pocket, for fear of mistaking it for your Aqua-Vu.

Fortunately, for those Ice Show shoppers savvy enough to purchase a new Micro AV, Micro AV Plus or Micro AV Plus DVR, pockets can remain the domain of wireless devices. Now through January 15, 2013, purchase of any of these three Micro Aqua-Vus will net you a free custom Aqua-Vu Micro Soft Carrying Case, complete with an Auxiliary Power Charger that’s even compatible with those super convenient solar-powered battery chargers. It’s a $70 value that will keep your new Micro AV perpetually protected and juiced with power.

Get ready. Aqua-Vu is fully charged, primed and positioned for a major insurgence on ice.