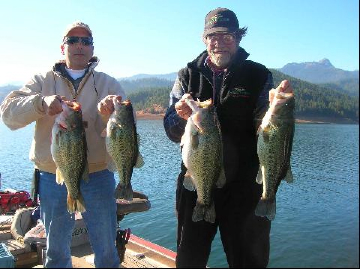 Had it been anyone else, and I mean anyone … I would have called, “Bull-Snot!” (Well, you know what I mean). The “Maine” Guide, John Gray, is one of the straightest shooters and best people you will find in the fishing industry. And, plus, I have seen pictures and heard the first-hand accounts from two other sources.

Once again, John has found the hawgs on Trinity. Most people think that Trinity Lake holds only smallmouth bass. Now don’t get me wrong, those 3 to 6 pound smallies will rip your arms off and laugh at you as they drag your appendages off to the depths of Trinity, and in my mind they are the main attraction, but that lake is loaded with fat, healthy largemouth as well.

As if those numbers were not enough to send me through the roof with my Gitzits and Pro Worms (Gray’s primary weapons on Trinity) … he then sent me the pictures. Some guys have all of the luck!

We all know and have seen that you can get bags like this on the Delta or on Clear Lake … but in doing so you are not going to land 4.5 smallies. That is what makes Trinity so special. I had already begun racking my brain to see when I could get up there. In light of November’s events, John’s phone has been ringing more than ever in the months of December and January. Located between 2,000 and 3,000 feet in the Trinity Alps, it can get a wee bit cold up on that lake this time of year.

So it was settled, I’d be there for at least one day the week between Christmas and New Year’s.

“Anything I need to bring?” I asked John.

“Yeah, we’re gonna do a little bit of spoonin.’” He said.

“You talkin’ in the hotel room or on the water.” I jokingly replied.

“Well that depends. You wanna fish or you want them to find you on the bottom of the lake with cement feet?” He laughingly chuckled. 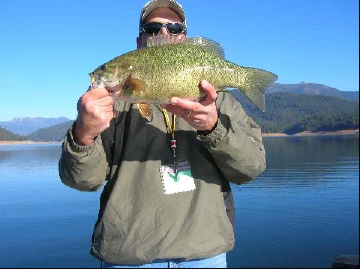 “Poke around in Sacramento and see if you can get your hands on the two largest sizes of the Duh Team Spoons. If you find them, we want the morning dawn, black shad and aji colors. Spend at least $75 and I’ll reimburse you. Those spoons worked like magic on Friday. When one of the bass spit up a stunted Kokanee (the primary forage for lunker bass on Trinity Lake), I realized why. It is an absolute match. If you can’t find them, the Revenge or Pirk Minnow spoons will probably be fine.”

I asked John where the fish were and he replied, “Same spot as last year, in pods on those tailing piles. We were catching them in 45+ feet of water and don’t worry, not many guys will be able to find them. They are wadded up in only a few spots about the size of the back of my pickup.”

Unfortunately for me, a little thing called work delayed my trip to Trinity until late December. Had the lake level maintained fairly constant that would not have been a big deal. However, we had record rains in Northern California in late December and those areas that were holding fish in 45 feet of water were down around 55 to 60 feet deep and it unsettled the fish John charted.

Instead of being in the valleys between piles, the fish moved about half way up the piles and were holding in about 52 feet. The massive lake fluctuations and the fact that we happened to hit the lake on a day between storms (a cold front with a steady to slightly rising barometer) made the fishing tougher than I hoped.

A normal trip to Trinity between March and October affords you the opportunity to catch 20 to 60 fish. On any given day during that timeframe you may just catch a 20-pound 5-fish limit. November to February will lessen your numbers; but you might just hit the 25-30 pound range. By John’s standards, our day on Trinity was poor for December, however, anytime I can catch a 15 pound limit and two 3.5 pounders, I just flat out don’t complain!

Throughout the day we alternated between darter-headed tubes and Pro worms, drop-shots with various finesse plastics, and jigging Duh! Team spoons on flippin’ sticks with 20 lb. McCoy line. I had not done much spooning before this trip and it was a phenomenal technique to learn. On this day, as has been John’s experience this winter, the Duh! Team spoons vastly outperformed the Gitzits and worms.

All of our fish came from 20-55 feet with most of them coming in the 45-55 foot range. Unlike on a drop-shot or with a darter-head, when you get hit on a spoon, there is very little doubt your bait has been assaulted. Every time I was hit I was rhythmically jigging my spoon up off of the bottom of the lake about 3 to 4 feet and then letting it fall on a controlled slack line. You develop a very distinct rhythm. You know how that spoon should fall and exactly where your rod tip should be when the spoon is on bottom. So, if you drop the rod tip to the established point and the spoon does not fall down to pull your line taut: set the hook and hold on.

The largest concern with those heavy spoons (the ones we used were between 2 and 4 ounces) is that your foe, Mr. Bass, has an extremely heavy object leveraged off of the side of his mug. Hence, you are best off to get those fish to the boat pronto and give them no slack at all. If that fish jumps, you are in a world of trouble. Once he gets to swinging his head around he can very easily cantilever that heavy spoon from his mouth. Luckily we experienced little trouble with lost fish. But I cannot say the same for lost spoons. Be prepared to break a few off of those heavy spoons between the rocks.

If you head to Trinity make sure that you bring your warm clothes and rain gear. Some of the very best fishing will be between now and the end of April and it will likely be cold. You might just find yourself with a 20+ pound limit of fish – and more than a couple of those fish are likely to be smallies.

Enjoy and be safe.