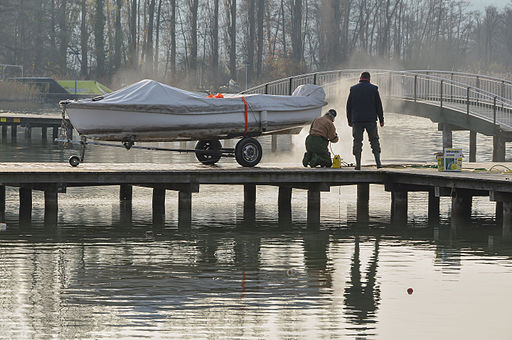 by BoatUS and American Motorcyclist Association

The coming of cooler weather means an end to the boating and motorcycling season for many. Chiefly important in preparing these vehicles for winter is managing the potential for engine damage from the federally-mandated ethanol blend in our nation's gasoline supply.

Ethanol in gasoline stored for long periods can damage marine and motorcycle engines: "phase separation" of the fuel can leave a corrosive water-soaked ethanol mixture at the bottom of the gas tank. Half of the respondents of a recent Boat Owners Association of The United States (BoatU.S.) survey reported that they have had to replace or repair their boat engine or fuel system parts due to suspected ethanol-related damage, costing an average $1,000 for repairs.

To prevent ethanol problems over the winter, boats with built-in gas tanks should have fuel stabilizer added and the tank left nearly full. E10 fuel remaining in small portable gas tanks (and not pre-mixed with 2-stroke engine oil) should be poured into your car's gas tank and used quickly. Same goes for motorcycles - store full with stabilizer or drain completely.

So how did ethanol get into our gas? Signed into law in 2005 and expanded in 2007, the Renewable Fuel Standard (RFS) requires an increasing amount of biofuels such as corn ethanol to be blended into the gasoline supply. However, the ethanol mandate has failed to achieve promised consumer and environmental benefits.

In addition to winter storage and engine repair concerns, ethanol-blended fuel is actually worse for our air and water. According to research from the University of Tennessee, ethanol's "clean alternative" record is "highly questionable." The 2014 federal National Climate Assessment reported that ethanol production can require 220 times more water than gasoline.

Ninety-one percent of those surveyed by BoatU.S. prefer non-ethanol fuel for their boats. An AMA-commissioned poll found that 78 percent of all voters – not just motorcycle owners – have "very serious concerns about E15 use" and 70 percent oppose increasing the amounts of ethanol blended into gasoline.

But the Environmental Protection Agency ignores the public's concerns and continues to increase the amount of ethanol required to be blended in our nation's gas. Even though it's illegal to use E15 (15 percent ethanol by volume) in marine engines, snowmobiles, motorcycles, lawnmowers, and any vehicle made before 2001, E15 can now be found in 24 states. Using E15 in many vehicles on the road today will void the manufacturer's warranty.

With a recent $100 million USDA grant made available to subsidize the installation of blender pumps at gas stations throughout the country, access to ethanol-free gas may soon be more difficult, leading to even more cases of inadvertent misfueling and engine damage.

Rob Dingman is the President and CEO of the American Motorcyclist Association, America's largest motorcycling organization and Margaret Podlich is the President of the Boat Owners Association of The United States (BoatUS), the nation's largest recreational boat owner advocacy, service and safety group.