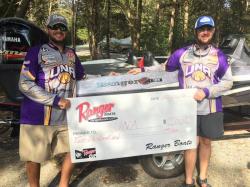 Collegiate anglers take home $2,000 and other prizes in winner-take-all challenge

FLIPPIN, Ark – Sloan Pennington and Hunter McCarty, collegiate anglers from the University of North Alabama, won the Ranger Cup University Team of the Year Challenge in a winner-take-all, made-for-TV event on Texas' Lake Fairfield. The tournament, which utilized a rules format where all legal fish are weighed and released from the boat, pitted the North Alabama anglers against a team from Kansas State University.

Pennington and McCarty qualified for the expense-paid competition by winning the BoatUS Collegiate Bass Fishing Championship presented by Cabela's at Pickwick Lake. The duo topped Kansas State University anglers Travis Blenn and Kyle Aslop, who qualified for the event by winning the YETI FLW College Fishing National Championship on Wheeler Lake. This marked the first time in the program's history where both qualifiers were the current national champions from their respective trails.

Both teams faced the daunting task of landing as many legal fish (over 14 inches) as possible in a single day to take the title. With no experience or practice time on the lake, a stiff 25 mph wind created even more difficulties for both teams.

"It was a straight-line wind coming right up the lake," said Pennington. "It was extremely hard to do anything. There weren't really any places to hide and get out of the wind. It was a tough day of fishing."

Without any previous experience on Lake Fairfield, the team used maps to locate places they felt would hold fish. The first stop yielded a couple of fish by flipping a frog but the bite suddenly stopped.

"Going in blind, we went to the riprap because it had all the right ingredients, including bait," said Pennington. "We were fishing reeds and scattered hydrilla. Our first bite was on flipping so we thought we were about to get on a flipping pattern. We may have caught one more fish and then it just died."

After consulting the map, the duo headed to new locations that looked promising but failed to find any fish or bait. The team headed back to their first location as it was the only place that produced.

"Those other places didn't pan out so we went back to the first spot, which was the only place we found bait," said Pennington. "I knew there would be fish around the bait, we were just going to have to figure them out."

The anglers located the bait again but it was spread anywhere from 8 to 20 feet of water.

"I got on the bottom of the boat and tied on a crankbait," said Pennington. "That was the deal. Our fish came anywhere from 6 to 20 feet. You can see the fish on the graph. They were streaking, chasing the bait. We didn't expect to be deep cranking. We had a couple of crankbaits and one cranking rod. Once we figured out our pattern, all of our fish came from deeper water."

With high winds, finding fish was difficult but getting around the choppy lake was easy, as both teams fished from brand new Ranger RT198 boat outfitted with a Garmin EchoMap unit and a 150-horsepower Yamaha outboard.

"The water was insanely rough but that boat handled really well," said Pennington. "We never took a wave over the bow. I have never been in an aluminum boat with that much power behind it. Everything about it is perfect for beginners and experienced anglers."

Pennington and McCarty's win over Kansas State marks back-to-back collegiate championship wins for the University of North Alabama. The team won $2,000 as well as bragging rights for their university. For competing in the challenge, both participating teams received a grand-prize package that included travel, lodging and meals.

The made-for-TV fish off will be televised nationally on future episodes of "Americana Outdoors" and the "Cabela's Collegiate Bass Fishing Series."

Modeled after Ranger Cup, the most lucrative contingency rewards in the industry, Ranger Cup University is the first program designed exclusively for collegiate anglers and is open to those fishing in either FLW- or BoatUS-affiliated competitions. Signup is free, regardless of which brand of boat the anglers own. To remain qualified in the program, anglers need only adhere to clothing and logo requirements. As part of the Ranger Cup University program, participants will be able to receive specially discounted tournament gear through Gemini Custom Apparel, with no artwork or set-up fees. Through this partnership, Ranger Cup University anglers can purchase fully customized tournament jerseys for as low as $48.

About Ranger Boats
Headquartered in Flippin, Ark., Ranger Boats is the nation's premier manufacturer of legendary fiberglass and aluminum fishing boats, with acclaimed models and series in the bass, multi-species, fish 'n play, saltwater, waterfowl utility and pontoon boat segments. Founded in 1968 by Forrest L. Wood, Ranger Boats continues its commitment to building the highest-quality, strongest-performing boats on the water. For more information, go to RangerBoats.com.