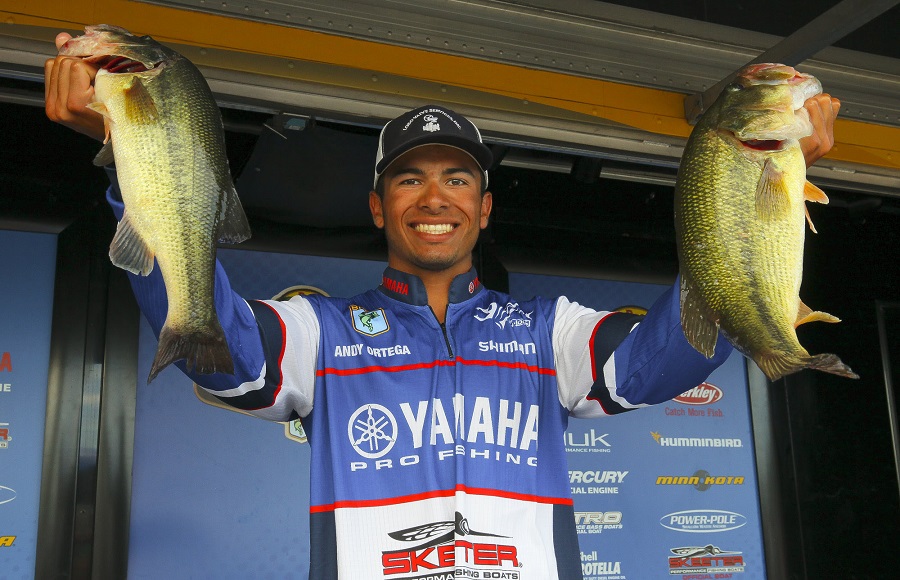 Andy Ortega of Odessa, Texas, takes the lead on the second day of the Bass Pro Shops Bassmaster Central Open No. 3 held on Grand Lake O’ the Cherokees out of Grove, Okla., with a two-day total weight of 28 pounds, 6 ounces.

The 18-year-old Odessa, Texas, angler weighed in a five-bass limit of 12 pounds, 7 ounces to take over the lead in the pro division with 28-6. “I had a little bit less today, but yesterday I had more than I was expecting,” he said. “I was expecting to have 12 pounds and I ended up getting 15, which was a bonus and an awesome head start.”

“It was a lot of hard work today,” Ortega said. However, the teen angler is used to hard work after spending the last two months working 70 hours a week in the west Texas gas industry.

Ortega threw a topwater lure in an area receiving heavy fishing pressure and managed to catch three keepers by about 10 o’clock. “There were about eight boats fishing my area, but I watched every single one of them and none of them were catching fish,” he said.

Moving on to a new spot, Ortega completed his limit with a couple of squeakers. “They were little 1-pounders,” he said.

“So I had a gut feeling to go back to my primary area. I picked up one of my custom jigs that I make at home, and I ended up culling two times.”

The former Junior Bassmaster angler has a reputation for catching big bass. He once caught a 10-pounder that measured 28 1/2 inches and set a Texas state record for length.

“The fishing was pretty consistent with how I caught them yesterday,” Elam said. “I just have to hunker down and look for more stuff.”

Today the Tulsa, Oka., pro relied on three lures to catch his fish in some of the same spots and other areas where he has caught bass in the past and some new spots.

The pro anglers are not only vying for a berth in the 2018 GEICO Bassmaster Classic presented by DICK’S Sporting Goods, which will be held on South Carolina’s Lake Hartwell in March, but also a first-place prize package including a Skeeter ZX200 and tandem axle trailer powered by a Yamaha SHO200, and loaded with a Minn Kota Fortrex trolling motor and Lowrance electronics.

Ascension Bass Anglers club member Will Major of Port Allen, La., moved into first place in the co-angler division with 15 pounds. The 70-year-old retired BASF chemical company employee caught three keepers weighing 6-12 on the same lure he used on Thursday. He said the key to catching his keepers was his pro division partner allowed him to “fish his strength.”

The co-angler winner will receive a Nitro Z18 and trailer powered by a Mercury 150 Pro XS, and loaded with a Minn Kota Maxxum trolling motor and Lowrance electronics.

Championship Saturday’s takeoff will be held at 7 a.m. CT Wolf Creek Park, 963 N. 16th St., in Grove. The final weigh-in will move to the Bass Pro Shops at 101 Bass Pro Shop Drive in Broken Arrow and will begin at approximately at 4:30 p.m.

The event is hosted by the City of Grove, Okla.