Robert Burnett, 55, from Inglis, is one of the most productive participants in TrophyCatch, with 26 Lunker Club (8 to 9.9 pounds) and one Trophy Club entry (10 to 12.9 pounds). His story and videos highlight the success of catch-and-release.

On June 1 around 11:15 a.m., he was fishing with a shiner when he caught a bass that weighed 8 pounds, 11 ounces. After getting a quick weight photo on a digital 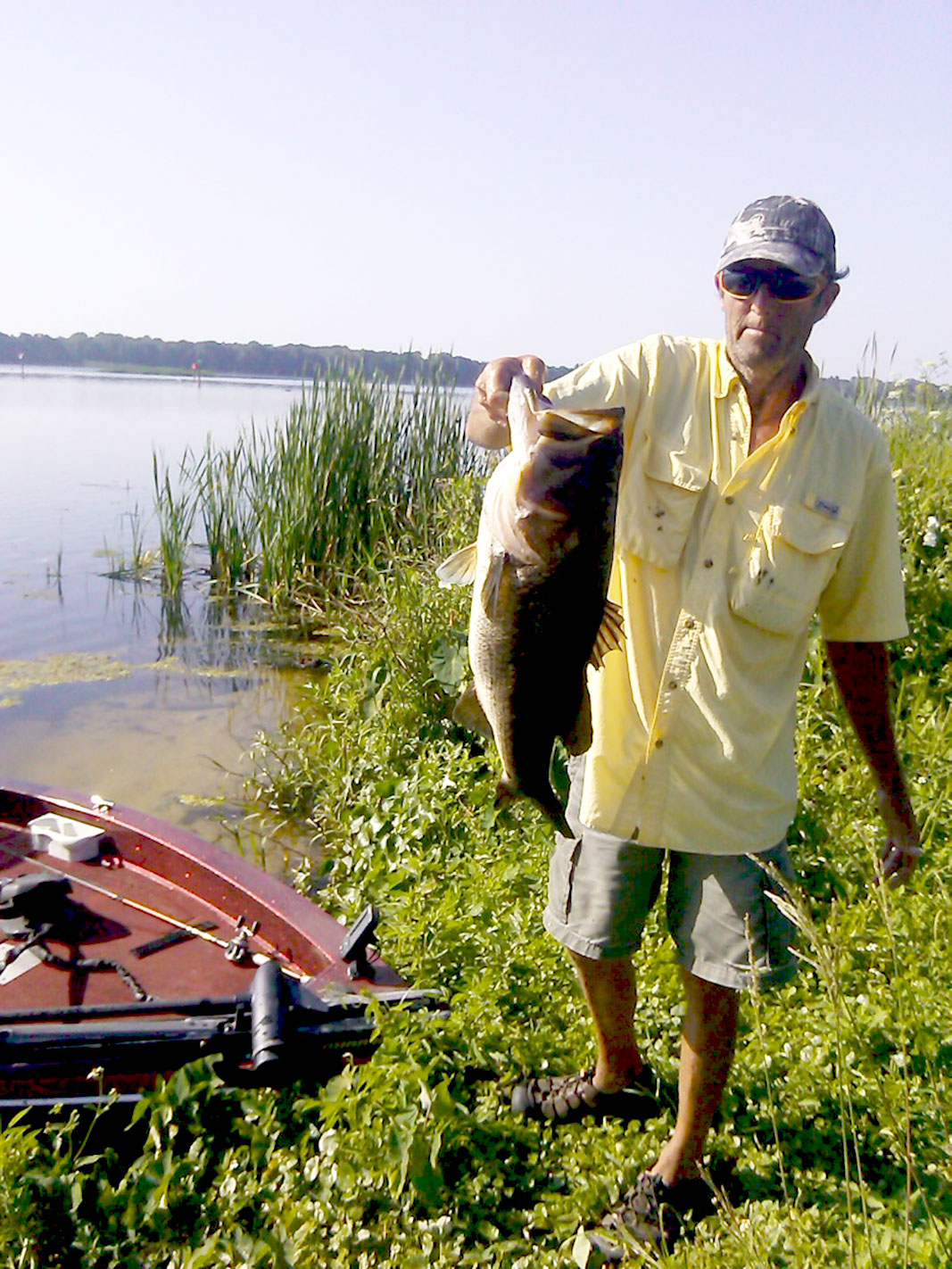 hand scale, he clipped a fin to send to the Florida Fish and Wildlife Conservation Commission (FWC) for genetic analysis as part of the TrophyCatch program, and carefully returned the fish to the water. He then resumed fishing, caught-and-released a 3-pounder and then caught another bass.

As his video shows (http://bit.ly/1Twxm5q), it was the same bass he had caught 15 minutes earlier, weighed, clipped and released. Pretty evident that, for her at least, being hooked, weighed on digital scales, photographed and released wasn’t too traumatic, as she was successfully chasing shiners again less than 15 minutes later.

Burnett moved to Inglis in 2013, and since retiring can often be found fishing on Lake Rousseau (Levy and Citrus counties), which is an impoundment of the Withlacoochee River. As part of the original Cross Florida Barge Canal project, this large lake is full of cypress trees, pennywort islands and sometimes hydrilla.

Burnett is a shiner fisherman, who most afternoons baits up a hole in the vegetation with hog pellets and then throws a cast net to collect bait for the next day. He takes a straightforward approach to his fishing, having three heavy-duty rods with bait-casting reels rigged and ready to go based upon the size of shiner he is fishing. The only difference is whether it has a 1/0, 2/0 or 3/0 hook attached to his 30-pound braided line, often SpiderWire supplied as a prize from previous TrophyCatch rewards.

Burnett free-spools his shiners without a weight or float, letting them swim up under the vegetation to where the big bass swim. Then once he sets the hook, he lets the bass work its own way out of the heavy vegetation and uses the heavy braided line to ensure he can boat one.

Burnett also noted that he carefully follows the FWC handling advice to clip the fishing line if a fish swallows a hook too deeply to remove easily. He has observed caught fish with specific markings, such as a scar behind the gill cover and had to clip the line, leaving the hook in. Then within 10 days, he has caught the same fish again and noticed there was no sign of the hook bothering the fish. This type of anecdotal information helps to substantiate and reconfirm the value of releasing large trophy-size bass so anglers can enjoy catching them again.

Perhaps Robert Burnett will be the one that catches it next time, or his wife – another TrophyCatch participant – or one of his two boys, or some other lucky angler. Catch-and-release works and Burnett, who has been fishing since before he joined his first bass club at age 15, sees it as a way to demonstrate his conservation stewardship principles, even if it was not required to earn TrophyCatch rewards.

The FWC’s TrophyCatch program, since Oct. 1, 2012, has verified more than 2,350 bass heavier than 8 pounds that anglers caught, documented and released. Included in those, were 556 Trophy Club (10-12.9 pounds) and 19 Hall of Fame (heavier than 13 pounds) catches. Each of these entrants helps provide valuable data to the FWC through this citizen-science, conservation program. In addition, each verified catch earned a lucky angler at least $100 in Bass Pro Shops or similar gift cards, a Bass King shirt, other rewards and a certificate for the accomplishment. This incentive-driven approach to promoting release of the most sought-after trophy bass is reducing the need to prohibit harvest with regulations and has proved highly successful.

Ultimately, the direct impact of catch-and-release depends on anglers carefully handling the bass and getting it back in the water where it came from as quickly as practical. To provide the required documentation for TrophyCatch, however, a photo of the entire bass (head to tail) on a scale with the weight showing or official published tournament results is needed.

People can sign up for free at TrophyCatchFlorida.com to earn a chance to win a Phoenix bass boat powered by Mercury Marine and equipped with a Power-Pole shallow-water anchoring system and electronic charting by Navionics. While on the site, people can explore the photo gallery and search for catches by water body, county, angler or size class.