Palaniuk Comes From Behind to Win Bassmaster Elite at Lake Champlain 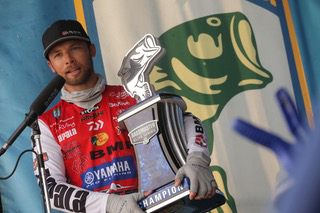 Brandon Palaniuk, of Rathdrum, Idaho, has won the 2020 Bassmaster Elite at Lake Champlain with a four-day total of 80 pounds, 1 ounce. Photo by Seigo Saito/B.A.S.S.

PLATTSBURGH, N.Y. — Turning in his best performance of the week, Brandon Palaniuk leveraged a blistering afternoon bite to sack up 21 pounds, 6 ounces and win the Bassmaster Elite at Lake Champlainwith a four-day total of 80-1.

“I had one boulder and I shut down before I got to it and as I came off pad, I see a dot on my (Humminbird) Down Imaging and I’m like, ‘Holy cow, that looks like a giant smallmouth,’” Palaniuk said. “I grabbed my rod, threw my bait back before I even dropped my trolling motor.

“The boat’s drifting away, I drop my trolling motor, I pick up and my line’s swimming off. I set the hook and a 4 1/2-pounder goes airborne — way back there. After I caught that fish, I rolled up to the boulder and they were stacked on top of it. Then, every single boulder on that flat in 28 to 32 feet of water had a 4-plus-pounder on it.”

Sticking with what produced the majority of his bites this week, Palaniuk caught his final-round fish on a drop shot with a green pumpkin/blue fleck X Zone Finesse Slammer. He used a No. 2 drop-shot hook and a 3/8-ounce VMC tungsten teardrop weight.

After three days of mostly calm conditions, Championship Sunday brought strong winds, clouds and occasional showers. Noting that the wind likely moved schools of baitfish into the areas he fished, Palaniuk said his game plan came together as well as he’d hoped.

“It was just one of those days where everything worked out,” he said. “All week long, I said, ‘Just give me a shot,’ because I looked at the weather and I knew we were going to get that windy weather we got in practice.

“I had a really good practice and I felt like I could literally drive around, look at my (Humminbird) LakeMaster charts, pull up on a spot and catch big ones. I think the wind this morning helped push those baitfish up and it moved a lot of those fish up. Those fish aren’t resident fish; they chase schools of bait.”

Spending his day targeting flats with scattered rock and boulders within the Inland Sea (Champlain’s northeast section), Palaniuk said his pattern was so reliable he actually moved with the bait schools. He started on a likely spot and drifted with the wind until he no longer spotted fish on his Humminbird 360.

“When I started not seeing them, I’d jump to the next place and catch another big one,” Palaniuk said. “I hit one magical school this afternoon and every single boulder I could see on with Mega 360 (Imaging) had a big one on it.

“I literally started laughing while I was fighting them, because it was that good.”

Seth Feider of New Market, Minn., finished second with 78-14. After mixing it up with largemouth and smallmouth for three days, he focused on the latter Sunday and caught a limit of 19-14 to go with his previous bags that went 20-1, 21-7 and 17-8.

Feider caught his bass on a flat with a grassline point in 12 feet. He used a medium-diving crankbait and a Carolina-rigged Zoom Speed Craw.

“It’s where I’d been starting every day and then leaving and going largemouth fishing (around marina docks),” Feider said. “I knew with the cloudy skies my largemouth bite was out today, so I leaned on it as hard as I could.

“I got really lucky and caught two great big ones that gave me a chance. It just wasn’t enough.”

Focusing on a rocky point with grass, Hartman caught his fish on a Carolina rig with a craw bait and a 3/8-ounce peanut butter and jelly color Riot Baits Lil’ Creeper jig with a twin-tail trailer. Today’s dim weather seemed to stifle the hot morning bite he had experienced the previous three days.

“The bites were slow; very spaced out — it took me until 11 before I had a decent weight,” Hartman said. “The mornings had been slow, but when the sun would come up, it was like a light switch and they started eating good. We didn’t get that today.”

Feider won the Phoenix Boats Big Bass honors with a 6-6 largemouth he caught on Day 2, earning an additional $1,000.

The tournament was hosted by the Adirondack Coast Visitors Bureau, City of Plattsburgh and Clinton County with support from the Office of the Governor of the State of New York.

B.A.S.S. is the worldwide authority on bass fishing and keeper of the culture of the sport, providing cutting edge content on bass fishing whenever, wherever and however bass fishing fans want to use it. Headquartered in Birmingham, Ala., the 515,000-member organization’s fully integrated media platforms include the industry’s leading magazines (Bassmaster and B.A.S.S. Times), website (Bassmaster.com), television show (The Bassmasters on ESPN2 and The Pursuit Channel), radio show (Bassmaster Radio), social media programs and events. For more than 50 years, B.A.S.S. has been dedicated to access, conservation and youth fishing.