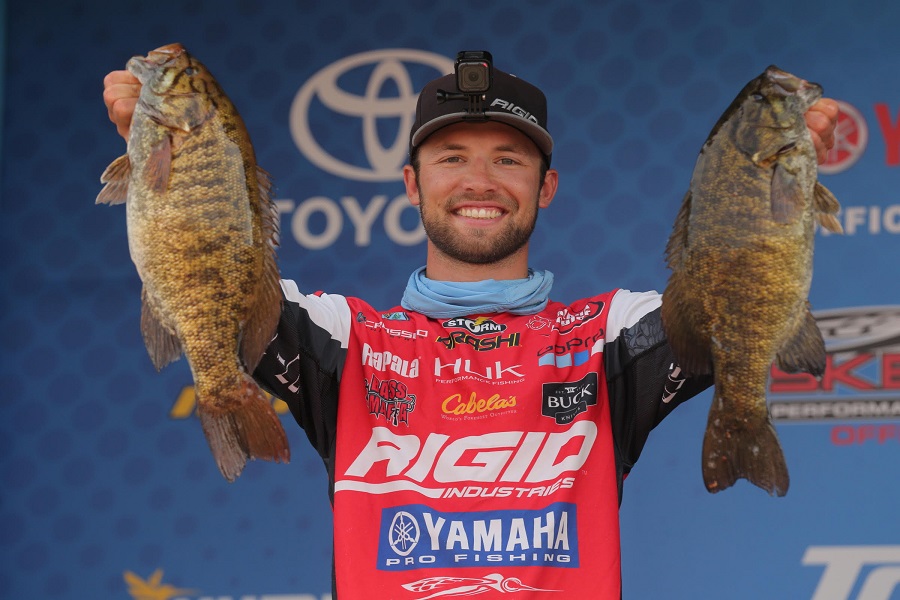 ONAMIA, Minn. — It’s rare for an angler to finish 19th in the first round of a major tournament and end up totally setting the buzz for the event.

It’s rarer still for that angler to seem totally satisfied with his performance.

But after catching 21 pounds, 4 ounces of smallmouth bass and placing 19th Thursday, Brandon Palaniuk seemed to sense he was closing in on the goal he set before this week’s Toyota Bassmaster Angler of the Year Championship — and that was to win his first career AOY title.

His 19th-place finish on Mille Lacs Lake — combined with a 26th-place finish by his closest AOY competitor Jason Christie (20-8) and a ninth-place showing by Tennessee pro Jacob Wheeler (22-10) — kept Palaniuk in the AOY lead by a margin of 22 points.

The three-time B.A.S.S. winner from Hayden, Idaho, is now just two more solid days away from the biggest accomplishment of his pro-fishing career.

“I was hoping to catch 23 pounds a day,” Palaniuk said. “I figured that would be enough to give me a chance to win the actual event this week — and if I win, the AOY will take care of itself. So now, I just have to go out and catch 25 (Friday) to even it out.”

Palaniuk started near the launch site at Eddy's Resort, but he rarely stayed in one spot long as he culled his way up to 21-4.

“I ran a lot,” he said. “I just hopped from place to place to place. I’m trying to fish the highest-percentage areas I can, and I haven’t found any one place where I felt confident there was a big school where I could go in and catch them like I did the last time we were here.”

Though there was some talk during practice that the fishing at Mille Lacs had slowed down a little since it burst onto the national scene during last year’s AOY Championship, the lake showed out again Thursday. It was ranked No. 1 in the nation on Bassmaster Magazine’s 100 Best Bass Lakes list this year.

“Compared to the practice I had, I really had an okay day here today,” Christie said. “I just didn’t catch any of those great big ones — that 5 1/2-pounder or 5 1/4 that you really need to make up a lot of ground here.”

Christie said he weighed in five fish that were in the 4 1/2-pound range — and he was glad to have them.

“I was a little bit worried about even catching one,” he said. “In the position I’m in this week, if you get out there and start worrying about not catching one, you start moving around a lot. Catching a few early kind of settled me down.”

Wheeler’s ninth-place finish left him 23 points back of Palaniuk, but it moved him to within one point of Christie (881-880) in the race for second place.

“This is exactly what I needed,” Wheeler said. “A lot of people have been saying this is a two-man race between Brandon and Jason. But realistically, if you have one bad day on this lake, you’re in 40th place.

“So, this was exactly what I needed. I just need to go out and do it a couple of more times.”

Alabama angler Dustin Connell finished 24th Thursday with 20-9 and took the lead in the Toyota Bassmaster Rookie of the Year standings with 765 total points. New York pro Jamie Hartman fell to second, and despite finishing in 48th place on the first day of competition is only one point behind with 764 for ROY.

Unlike the last two years, there will be prize money and a trophy awarded to the angler who has the best three-day weight during the AOY Championship.

Texas angler Keith Combs grabbed the early lead in that race Thursday with a bag of 24-15. Michigan angler Jonathon VanDam was second with 24-2, and Pennsylvania angler Dave Lefebre was third with 23-7.

The full field will fish again Friday and Sunday to determine the AOY Championship and the event winner. Daily takeoffs will be held each day at 6:50 a.m. CT from Eddy's Resort, and daily weigh-ins will be held at 3:45 p.m. at Grand Casino Mille Lacs.

The field will take a break Saturday for Bassmaster University. Anglers will be conducting seminars and greeting fans near the weigh-in stand at Grand Casino Mille Lacs in conjunction with the Bassmaster Elite Series Outdoors Expo. Companies such as Toyota, Huk, Power-Pole and Berkley will be onsite featuring their latest products. Fans will be able to enjoy free boat and motor demo rides from Skeeter, Yamaha, Nitro, Triton and Mercury. There will also be arts and crafts and food vendors and activities for kids.

All venues are free and open to the public. The expo will begin at 11 a.m. CT. For more information and a full list of activities, visit Bassmaster.com/news/attend-toyota-bassmaster-angler-year-championship.

The championship is hosted by Grand Casino Mille Lacs.