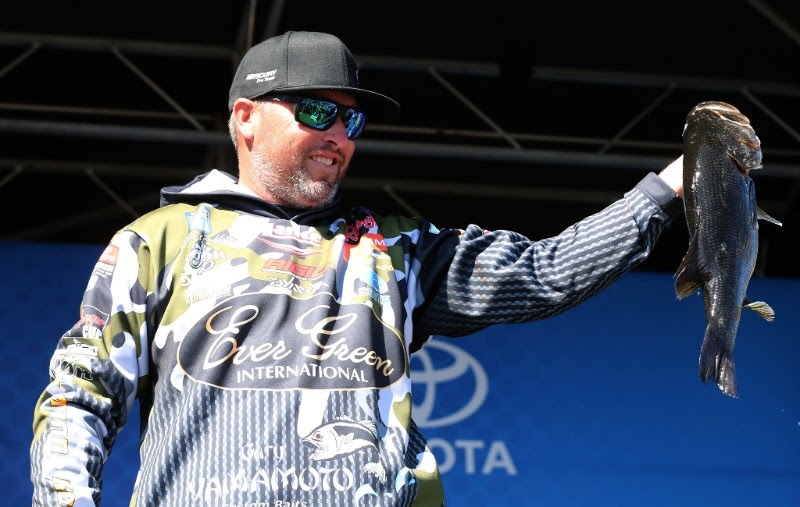 Brett Hite of Phoenix, Ariz., takes the lead on the third day of the Huk Performance Fishing Bassmaster Elite at Winyah Bay presented by GoRVing, bringing 18 pounds to the scales on Saturday for a three-day total weight of 50-2.

GEORGETOWN, S.C. — Despite a powerful cold front accompanied by strong northerly winds, many of the Top 51 anglers still made the long grueling run to the Cooper River near Charleston, S.C., to catch their fish.

Saturday was a shootout between the Top 3 anglers, which ended with the third lead change in as many days.

Brett Hite of Phoenix, Ariz., successfully plucked 18 pounds of largemouth bass from the same area he has been fishing the past two days. Hite will leave the docks on Championship Sunday with a three-day weight of 50-2, looking for the second victory of his career at the Huk Performance Fishing Bassmaster Elite at Winyah Bay presented by GoRVing.

So far, the biggest concern has been the long boat rides to access the bass-rich waters of the Cooper River. However, the attention has now shifted to rapidly dropping tides and a large cold front that will likely impact Sunday’s fishing.

“I’ve been focusing my efforts on the same school of bass for the past three days, and I expect the fishing to be just as good for one more day,” Hite said. “But, I’ll have to adapt tomorrow after this front pushes through. I’ve been catching good numbers of fish each day, but with the dropping tide, I had shallower water to deal with, which positioned the schools of bass near certain pieces of structure.”

Hite, who holds a slim lead over Texas angler Kelly Jordon (49-0), has been catching his limit of bass early enough during the day to head back to the launch ahead of time.

“The long boat rides have been going smoothly, but when you’re in contention to win a tournament like this, it’s smart to play it safe whenever you can,” he said. “It’s going to be much colder in the morning, but typically, tidal-river bass aren’t as affected by weather conditions — I hope that holds true. I will likely have to make some adjustments tomorrow, but I’m confident I’ll be able to stay on the school.”

Hite’s weights have been going up each day, but yesterday Jordon swung for the fences and weighed the heaviest five-bass limit of the tournament with 24-7. Jordon’s Friday limit, plus today’s 16-4, has put him in position to win on Sunday.

“I gambled yesterday, and it paid off,” Jordon said. “I slept great last night, and I’m going to sleep well again tonight. It helps to know exactly where I’m going tomorrow, and how I will be fishing. It’s just going to depend on whether or not the right bass eat or not.”

Jordon said the bite was different today. He caught a couple solid fish, but lost several others that would have helped his total Saturday.

“The fish were short striking my lures, which made it difficult to get a solid hook set and keep the bass on the line,” he said. “I blame the cold front for that, and I’ll adjust accordingly tomorrow.”

After leading on Friday, Britt Myers of Lake Wylie, S.C., slipped into third place today with 8-15, pushing his three-day total to 46-14. Myers explained that while he didn’t do as well as he had hoped, he’s still in contention for the title.

“To be honest, today’s small limit of bass might be the best 8 pounds, 15 ounces I’ve ever weighed. Especially if it turns into a victory tomorrow,” Myers said. “The fish I’ve been catching are still in the same basic location, but they’ve relocated to accommodate the shrinking tide, and I think I figured out where at the end of the day.”

Take-off on Championship Sunday will be held at 7a.m. ET at the Carroll Ashmore Campbell Marine Complex with the final weigh-in scheduled at the same location at 3:30 p.m.