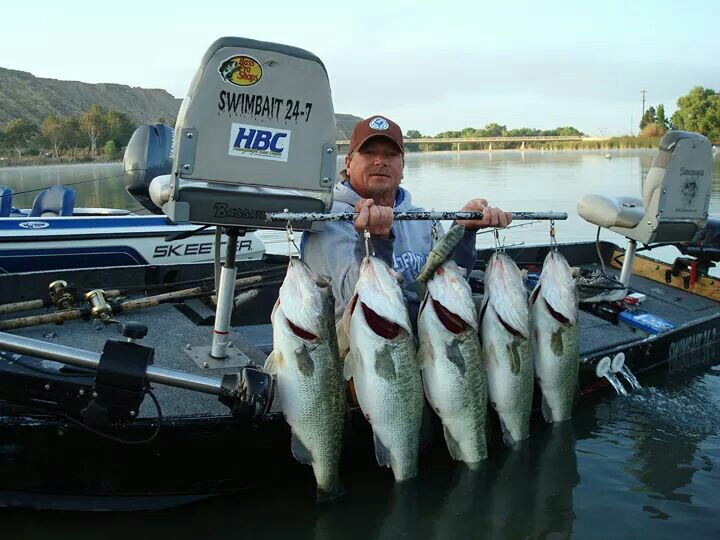 In the world of swimbait fishing Butch Brown stands apart from the crowd of trophy hunters. The numbers of fish over 10 pounds he has to his credit is mindboggling – 1,500 bass over that magical mark. He also has a personal best of 19-pounds, 3-ounces and countless “teeners”.

If you doubt the numbers all you have to do is watch his videos online as many of them can be seen cast-to-catch. A new swimbait from Optimum Baits, the Butch Brown Thumper Tail, bears his name and has created a buzz in the fishing world.

Brown classifies the bait as “old school” and says he was given one in the mid-90’s from the owner of Optimum Baits. “I was fishing from shore and he threw it up to me,” recalls Brown. The bait was a success and Brown created his own mold of the bait and made modifications in colors, weighting and hook placement.  He makes a point of molding successful baits in the event that are no longer made.

“Baits will get discontinued or they will change something about it and you can never get them again.” he adds that they will become effective again, no matter how popular they are.

“The fish get conditioned to seeing the same baits and will eventually stop biting,” he said. “The trophy fish from years past have died off and the new generation has never seen these baits,.” 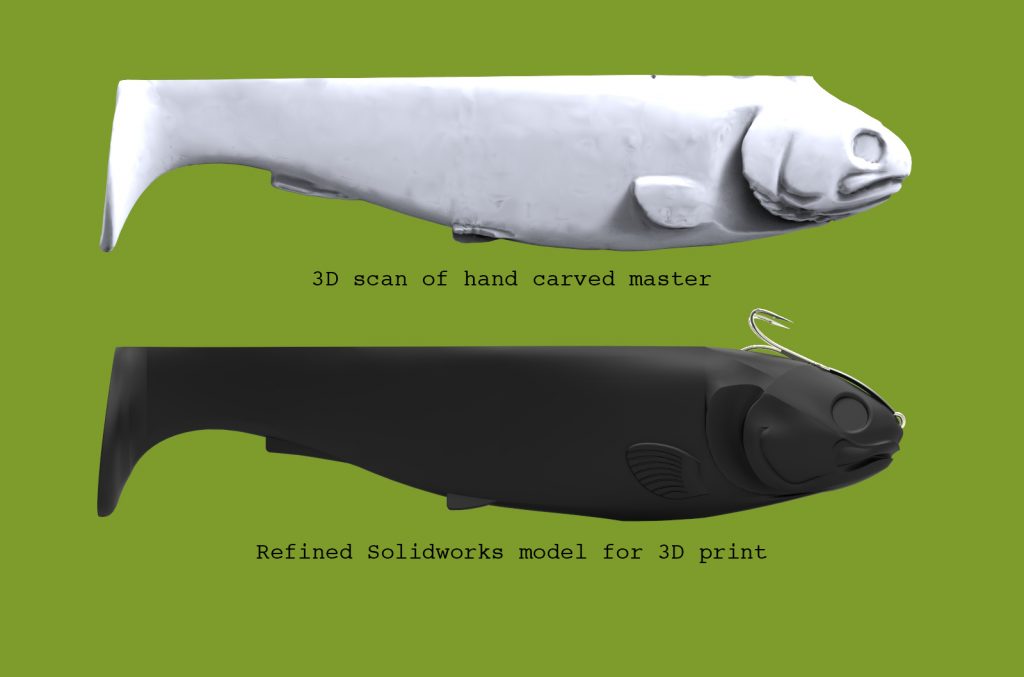 Thumper Tail is NOT a Copy

Just to be clear, the new version of the Thumper Tail is not just a copy of the old bait. It is the result of Brown’s own re-molding and tweaking of the bait along with his own color choices and adjusting the weight system.

“The old version was just a big leadhead; so I moved it back to make the bait more stable,” said Brown.

It also includes his preference for a unique hook placement based on hundreds of trophy fish catches. The process of creating the new version with Optimum Baits took well over a year to get it just right.

One thing you will notice about this bait is the hook. Instead of having a large single hook molded within or a treble hook rigged below, it features just one treble hook, near the head of the bait.

The bronze color has a specific purpose and he feels it does a better job blending than a black hook. The larger barb on this hook is why he selected it as fish can use the weight of the bait to throw hooks with smaller barbs.

He crimps the bait with a 60-pound wire and when hooked the fish have less leverage. He has learned through trial-and-error that this is the best way to land that fish of a lifetime. The way he rigs the hook also adds more movement and a natural appearance.

“My thoughts are that you have to get bit first,” he said. “This hook placement doesn’t overdo it, a big hook defeats the action and beauty of the bait and you will also lose more fish.”

The Thumper Tail comes rigged with the wire harness and hook that he personally uses and selected for the bait. It sits flush on the top of the head due to one of the hooks being bent out to allow for placement inside the head. He crimps a new wire after each fish to ensure he has the best chance at landing his next giant bass. 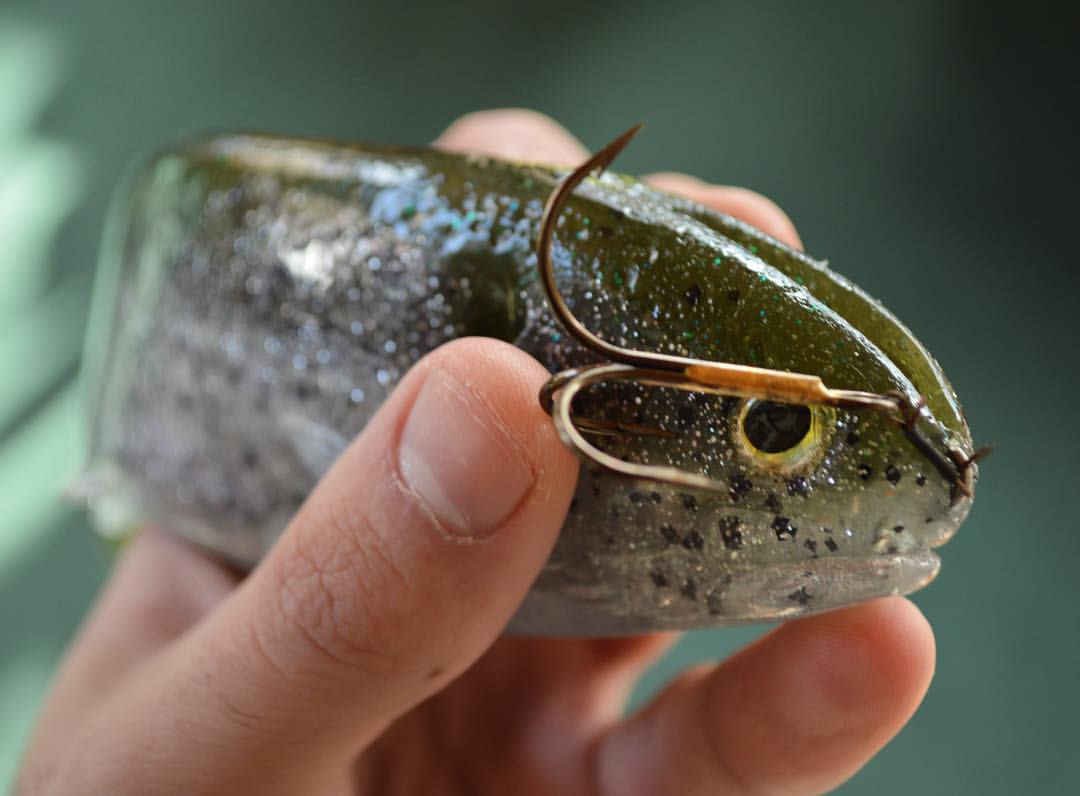 This is a big swimbait measuring nine-inches long and weighing over five-ounces.

Even with the heft of the bait, Brown explained he thinks of it like fishing a spinnerbait.

“The biggest thing is to not overthink it,” he said.  “If are fishing a spinnerbait you can feel the blades thumping and feel it as it flutters to the bottom. It’s the same with this bait.”

He likes to fish it several ways and says it works well for covering water. “I will fish parallel to the bank and cast it in 8- to 10-feet out in front of rocks, keeping it just above the bottom,” he shared.

Another technique is to fish points by casting out to deeper water and retrieving it back uphill. “Cast it out and let it fall,” he added. “You will feel the tail as it is falling and once it hits the bottom, snap it quick to get the tail moving and start your retrieve.”

Brown will fish the Thumper Tail with changes to speeds during his retrieve and says that the starting and stopping will also get followers to commit. He also likes to keep the bait from dragging on the bottom. “It doesn’t look natural, six-inches to a foot off the bottom is where you want to keep it because that is what the fish are use to seeing,” he said.

Fishing it during winter trout stockings is an ideal approach, but Brown feels it excels from the first cold snap of the year all the way until the grass begins to become thick in the spring. As summer approaches he will switch to glide baits like the Deps Slide Swimmer 250. 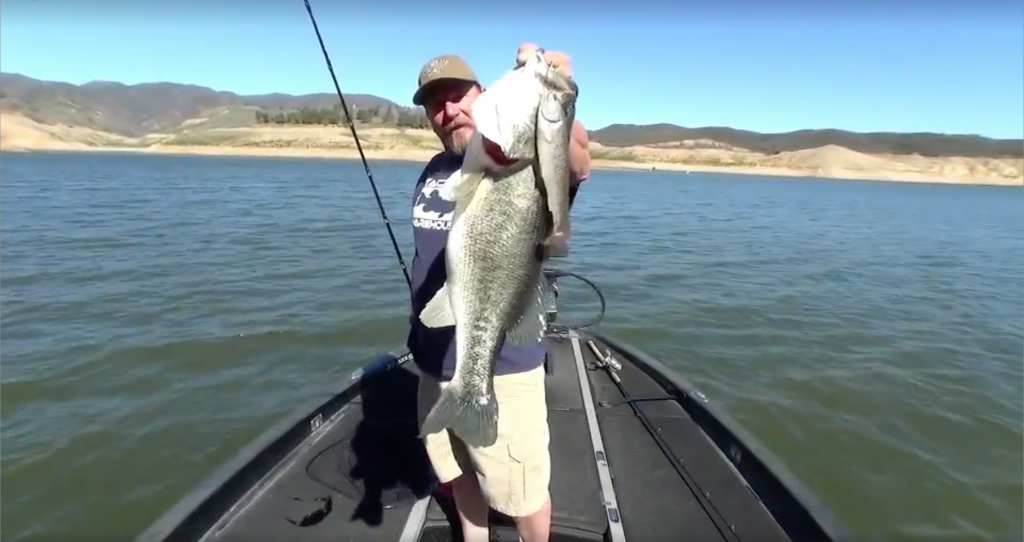 Brown relies on gear that he knows works and does not get caught up in changing with the latest trends. “Swimbait fishing is all about feel,” he said. “Your rod, the tick of the line down to the knobs on your reel.”

With that in mind, he selects his gear to have a close connection to what the bait is doing at all times.

His rod of choice for this bait is from Lowdown Custom Rods, an 8-foot XX-Heavy model rated for baits from 5- to 12-ounces. He matches this with a Calcutta 400B that features a 5.1:1 gear ratio and spools it up with 20-lb Seaguar AbrazX fluorocarbon.

“In the past I would use mono, but the fluorocarbon sinks and gets the bait down and also lasts so much longer,” said Brown. “With less stretch I also get better hooksets.”

Butch Brown is a wealth of information with swimbaits and his catches speak for themselves. His approach to fishing big baits comes from a dedication to his craft and fishing big baits exclusively. The man has never fished a drop-shot rig or Senko in his life, let that sink in. The Optimum Thumper Tail is the result of his attention to detail and years of experience as an expert on fishing a swimbait.