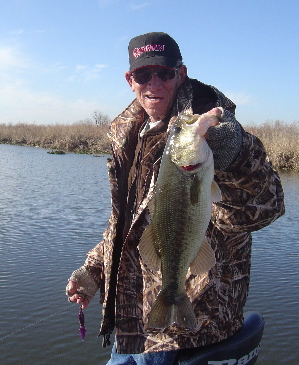 This article is written to help the Novice to the Advanced Bassfisherman that fishes the California Delta either in fun or in a tournament type format. The intent is to give to you an idea in approach to "Ledge Fishing" in finding ledge’s with your eye or with today’s electronic’s. Also, the approach taken in the apprention of largemouth bass by using some of today’s most common artificle baits from these ledge’s.

The California Delta is over 1000 mile’s of waterways with a levee system either created by man or still in a natural state. There are three (3) types of ledges that Im going to explain in how to find and fish. They are, one) the main levee itself 2) the berm 3) the nature break in the center of the waterway.

Before I get into this, I would like to tell you a story in how I became a ledge hunter and fisherman of ledge’s

In the later part of the 70's I purchased my first Ranger Boat. I was fishing with a group of guy’s that were well known at the time for winning or doing very well in the Delta in Tournaments. One day just after Christmas, I was out on Frank’s Tract flippin tules an came across this down tree. I knew I was going to catch a fish in it and did by throwing a Hair Jig between the fork’s of the main limbs. I could only get one fish out of it has in the past. One evening I was over at Dee Thomas’s house and told him about it. I told him where the down tree was and he said let’s go out tomorrow and you show me where that down tree is.

We went out and I showed him where that tree was. He got up on the trollin motor and proceeded toward’s that tree with a flippin stick in hand and a jig tied on. One flip and bingo get the net. I told him I could only get one fish out of the tree. He looked at me and then the depthfinder in which it said 6ft. Hmmmmm, he hit the trollin motor sideways and the depthfinder severly dropped from 6ft to 12ft in a matter of a blink. He brought the boat back to the 6ft mark and proceeded to boat 7 more fish in a row on the ledge and on the side. On the 5th fish, I ran over the front end of the boat trying to net it. He looked at me for a split second and said, "Son" get your %$#$^ back in here and net this fish. From that day on I searched for ledges and found more than I can count. In the 80's and even up until today I still catch fish on them has many of the avid known Delta fisherman do today.

Main levee’s today are the most commonly fished pattern out on the Delta. What I found to hold up the most is the windy sections of the Delta. What to look for is this, "Inside bends" in the levee. What I mean is the part that proceeds "in" from the furtheriest part out. Being the Delta has current flowing, the current will or had washed the bank out of softer material creating a harder bottom, thus creating a ledge. Once you find one you will notice that your depthfinder will read a deeper depth and closer to the main bank than the outside point does at the same reading. If it has current flowing in this found section. Most likely it will have a top of 5ft ledge somewhere along it with a sever break at least double the top of the break. This is where the fish will be at high tide has well has low tide. One of the "Key" facts among the Delta fisherman is that bass feed vertically instead of horizontally has bass in lakes.

To fish it. approach the ledge knowingly where its at watching your depthfinder for secondary break’s or any odd looking structure that maybe under water. Most commonly used is a jig with a head designed that falls vertically. Fish location can be at either three (3) location’s on the ledge. Within a couple of feet of the top of the ledge to a foot or so just on the downside of the ledge. Fish that are in the middle of the ledge are usually suspended and are harder to catch. The last location is the bottom and here you will find them within a depth range that is at the time a comfort zone to them and you can fish them accordingly by using the known found depth.

Center berms are found through out the Delta in many form’s. From a couple of feet wide to huge Island size. It doesn’t matter because its surrounded by water and it was broken off from the mainland by a reason, flow of the river, thus harder composites in the area. A lot of the berm’s in the Delta have one side deeper than the other in depth. This is easy to find by using your depthfinder and just going around it to see which side has the deepest in depth.

There are actually two forms of ledges found out on the Delta, one by the current flow itself and the man made one’s made by the clamshell crane’s used in the early to mid 1900's. The clamshell ledges are the most commonly found and fished today.

Ledges made by the Clamshell are usually found in the middle of a berm. How you can tell is by the irregularity of the bottom and sometime’s the sides of the berms. The bottom on your depthfinder will show different depth’s within a couple of feet. This type of ledge is usually found on the ly side of the berm.

Ledges that are found near or on the point were made either by the current or by the clamshell and over the year’s have become smooth because of the current.

The most commonly fished is the current side. What you look for here is a break in the bank itself that change’s the flow of the current creating a back eddy. A lot of times, this is where you will find a secondary ledge down around 7-9ft dropping off too 15+ft. The ly side of the berm you may find them on the point, but rarely in the middle with the exception of spring. Piling’s are well known to have some sort of ledge on them in depth. They were used to tie up barges that were used to load and haul out produce and equipment or just to tie up barges for later use. Some have 3-4ft ledges and some have much has 15 foot in depth. These types of places can be found on either main levee’s or on large center berm’s throughout the Delta.

Good Luck in finding the Honey Holes of the California Delta