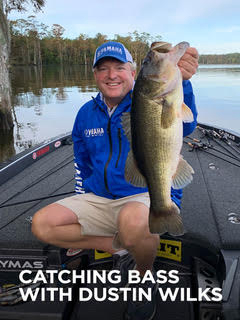 During the series, Wilks teaches viewers how to find and catch more fish from a variety of locales. Catching Bass with Dustin Wilks is a show that is action-packed and shows viewers numerous techniques for catching bass. His straightforward approach coupled with his whimsical demeanor makes this series the perfect teaching platform for anyone to be successful in bass fishing.

Dustin Wilks’ only aspiration growing up was to be a professional angler and he achieved that goal at a very young age. After spending more than a decade competing against the top names in fishing, Wilks decided it was time to give up life on the road and start a family. He believes he has a gift when it comes to fishing, and he wants to share it with others so they can experience the thrill of catching bass.