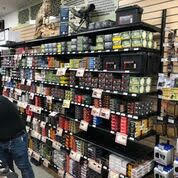 Rancho Cucamonga, CA – Turner’s Outdoorsman, California’s leading Hunting, Shooting Sports and Fishing Tackle Retailer, announces the debut of its second new retail location in Central California with the opening of the Turner’s Outdoorsman Fresno. Located at 6264 N. Blackstone Ave., in the old Herb Bauer Sporting Goods location, the store features an extensive selection of firearms, ammunition and shooting sports accessories including hunting equipment, as well as a vast selection of fishing tackle that is certain to fill the needs of the valleys hunters, shooters and anglers.

Turner’s Outdoorsman is the largest privately-owned specialty sporting goods chain in California and has been in business since 1971.Turner’s now operates 22 stores throughout California from Salinas to San Diego in addition to their E-commerce store. Turner’s is on pace to open at least 3 more stores by the end of 2018 with locations across the central valley and plans to continue their expansion into Northern California in 2019.