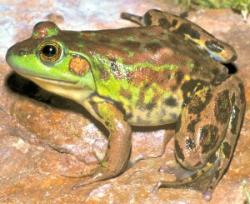 With spring approaching, the Department of Natural Resources is seeking volunteers throughout the state to assist with its annual frog and toad survey.
Michigan's is the second-longest-running such survey in the country, after Wisconsin.

"In Michigan, over the past 20 years, we've noticed a decline in Fowler's toads and mink frogs," said Lori Sargent, the DNR's frog and toad survey coordinator. "These are two species that have a limited range in Michigan, unlike most of the other species that occur statewide."

Declining populations of frogs, toads and other amphibians have been documented worldwide since the 1980s. Studies suggest amphibians are disappearing due to habitat loss, pollution, disease and collection.

"We have collected a large, valuable data set to help us evaluate Michigan's frog and toad populations," said Sargent. "We're now able to start watching trends and thinking about how to slow down some of the species' declines."

The surveys are conducted by volunteer observers along a statewide system of permanent survey routes, each consisting of 10 wetland sites. These sites are visited three times during spring, when frogs and toads are actively breeding. Observers listen for calling frogs and toads at each site, identify the species present, and make an estimate of abundance.

Sargent said new volunteers are needed in all parts of the state, and that the program's continued success is dependent on strong volunteer support. Those interested in volunteering should contact Lori Sargent at 517-284-6216 or SargentL@michigan.gov.

More information on the , and other projects supported by the Nongame Fish and Wildlife Fund, is available atwww.michigan.gov/wildlife.