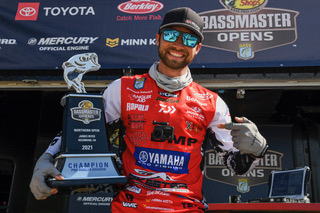 RICHMOND, Va. — Brandon Palaniuk had three days to sack up the winning total of 53 pounds, 12 ounces, but two memorable hours delivered most of his weight at the Basspro.com Bassmaster Northern Open on the James River.

A five-time Bassmaster Elite Series winner, the pro from Rathdrum, Idaho, notched his first Opens victory and collected a top prize of $52,000.

“I’ve fished the James River five times now in the Northern Opens; this was my fourth final day,” Palaniuk said. “I’ve come close and I’ve been trying to get this monkey off my back for a while and, dang, it feels good.”

Palaniuk spent his tournament in the Chickahominy River, which flows into the James downriver from the take-off site at Osborne Park & Boat Landing. The first day, he fished natural habitat features, but Days 2 and 3 saw him capitalizing on a fast-paced opportunity at Walkers Dam, about 22 miles upstream.

“I got beat to this spot on Day 1, but I figured out the cast late in the day yesterday,” Palaniuk said. “You had to make the exact cast. If you were off 2 feet left or right, you wouldn’t get bit. It would happen in the first five cranks of the reel handle.

“The incoming tide was best because it held the bait and the fish higher in the water.”

The week’s tide schedule brought outgoing water in the morning, then a rising cycle around midday. Tides advance approximately 50 minutes each day, so the second and third rounds presented Palaniuk with a narrow window of opportunity.

“Yesterday, I had three fish with an hour to go and I caught 22 pounds in the last hour,” he said. “I knew it was because of the incoming tide, so I told my marshal today ‘Low tide is at 12:35 (in the Chickahominy). We’re going to have 25 minutes of incoming tide before we have to leave. We’re going to push it to the last minute.'”

Both days, Palaniuk found that targeting specific current seams was critical to enticing bites. He observed large gizzard shad in the area and recognized that the bass were leveraging current dynamics to capture their meals.

Palaniuk caught his best fish on 6- and 8-inch Megabass Magdraft swimbaits in the albino color. He also caught fish on a drop shot with a green pumpkin/blue fleck XZone Lures Deception Worm, which he fished over isolated cover off the bank.

“I just cycled through it because it just seemed like there would be little feed windows,” Palaniuk said. “It changed every 10 minutes and you’d have to figure out where they were positioned. Once you found that, you could catch a couple pretty quick.”

Nicholas Bodsford of Richmond, Va., placed second with 50-5. The local favorite turned in one of the event’s most consistent performances with daily weights of 16-10, 16-7 and 17-4.

Bodsford caught his bass cranking shallow cover with a Lucky Craft 1.5 squarebill and flipping a Texas-rigged Missile Baits D Bomb. With changing water clarity and a minor cold front at the tournament’s beginning, his performance hinged on adaptation.

“Practice just got thrown out the window and every day, I had to start over,” Bodsford said. “I didn’t do the same thing one day; I just made adjustments.

“Where I caught them the first day, it was muddy and high yesterday. I ran back upriver and caught enough (to make the Top 10). Today, I scrapped everything. I just went fishing and it worked out.”

Jeff Queen of Catawba, N.C., finished third with 50-4. Keeping himself in the Top 10 the entire time, Queen placed eighth on Day 1 with 17-9, rose to second after adding 17-11 and ended his run Saturday with an even 15 pounds.

Queen caught his bass on a swim jig converted into a bladed jig with a Switch Blade made by his Queen Tackle company with a Jenko Tremor Shad trailer. He also caught fish on a 1/4-ounce tungsten finesse jig with a craw trailer.

“I had a good day and at the end, I stopped right across from the boat ramp and caught my biggest fish."

Palaniuk leads the Northern Open standings with 200 points. Bodsford is second with 199, followed by Queen with 198, Justin Margraves of Diana, Texas, with 197 and Alexander with 196.

About B.A.S.S.
B.A.S.S., which encompasses the Bassmaster tournament leagues, events and media platforms, is the worldwide authority on bass fishing and keeper of the culture of the sport, providing cutting edge content on bass fishing whenever, wherever and however bass fishing fans want to use it. Headquartered in Birmingham, Ala., the 515,000-member organization’s fully integrated media platforms include the industry’s leading magazines (Bassmaster and B.A.S.S. Times), website (Bassmaster.com), TV show, radio show, social media programs and events. For more than 50 years, B.A.S.S. has been dedicated to access, conservation and youth fishing.