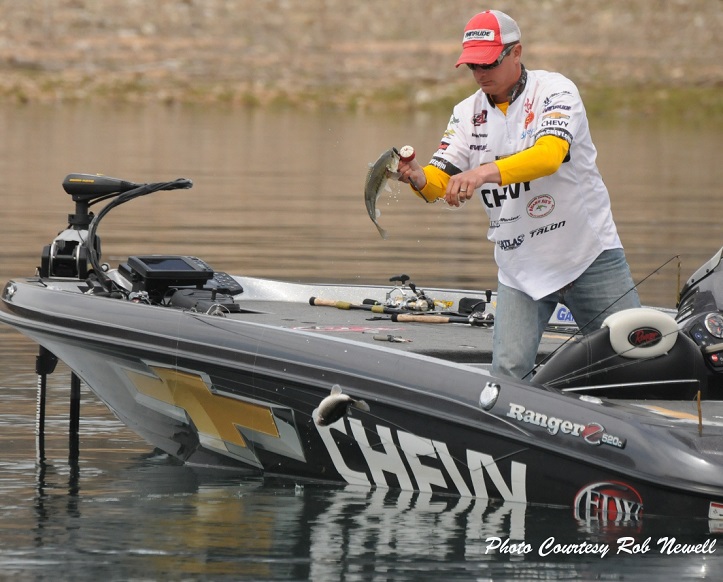 Launching into the 2014 FLW Tour with a disqualification at his first event, Tour pro Anthony Gagliardi celebrates his championship qualification with a sigh of relief.  With a week before this year's Forrest Wood Cup blast off on Lake Murray, Gagliardi shared some of his thoughts on the season with WesternBass.

WB: The DQ on Okeechobee, the first event of the season was a tough start. What did you do to get past that?

GAGLIARDI: I didn't have a great year last year. It wasn't bad, but it wasn't great and I kind of used the off season to distance myself from that. I knew we had the Cup at Murray this year, which was exciting and I was using the off season to get back in the right frame of mind. I was all geared up feeling positive and the disqualification happened before the year even started, it was a major devastating blow. It helped that I had a good tournament at Hartwell. I finished seventh and that got me feeling like I could get back on track for me. I built the season from that point forward. It wasn't easy and I can't say I've put it behind me, but it has gotten easier. After Hartwell, I knew mathematically it was still possible for me to make the Cup and then at the next one I got a top-20. By the 3rd event, I knew it was going to be attainable to qualify and I put my mind towards that.

WB: The Cup is a week away. How are you feeling about it?

GAGLIARDI: I haven't put any daylight to dark days into it. I've been out there re-familiarizing myself with the lake and the current conditions. I don't have a whole lot of time on the water during this time of year. It is so hot here in the off season, I don't go out fun fishing that much in August. I just wanted to get familiar with the way that the lake was looking more than the way it was fishing. It is always tough here this time of year in August. It is usually so hot out here during the summer. This year, water is actually lower than it normally is and the summer has been somewhat milder, so the fishing might be a little better than usual. I  am not going to say it's going to be great, but it will be good and the guys are going to catch fish using a variety of different techniques.  I think 15 to 17 lbs a day will be pretty good.

WB: Does your previous win on Murray up your confidence level?

GAGLIARDI:When I won in 2006, there was ice and sleet and freezing rain, so it will be a lot different. Having won here before kind of takes a bit of pressure off though. Everybody wants to win on their home lake and you don't get that many opportunities to fish a major tournament on your home body of water. I would say that having won there before gets that monkey off my back, so I am just going to go out and enjoy the tournament and let the chips fall where they may. I've had three FLW championships and an AOY title (I would like to do that again), but the one major thing on my bucket list is to win the championship.

WB: What will you do after the Cup?

GAGLIARDI: There is a long off season this year. It will be nice to sit back and take a break with all of the emotion that I was running through this year. I put a lot of pressure on myself to make the Cup this season and it seems like the weight lifted as soon as I knew I made it. With that pressure off, it almost seems like the off season has already begun.

WB: Batson Enterprises told us that you were developing a new rod series with them. What can you tell about that?

GAGLIARDI: It is in the initial stages right now. After the championship I am going to make a trip out west coast and visit with them. I will take a look at the blanks and we're going to put together a custom signature series line of rods. I would like to start with all purpose casting rod in the 7 to 7'2" range and then go from there.  This  is a pretty unique deal. I think is going to be a good opportunity for both or us. I am familiar with their rods and they're of the highest quality. They are something that I use personally. I am really excited about putting something together that everybody can use and enjoy.