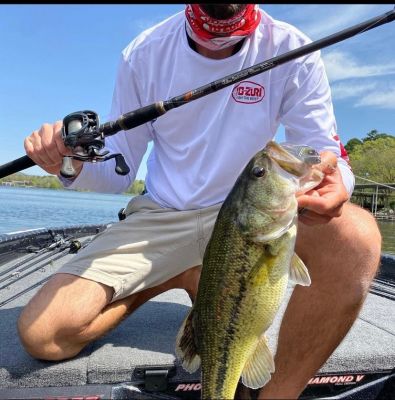 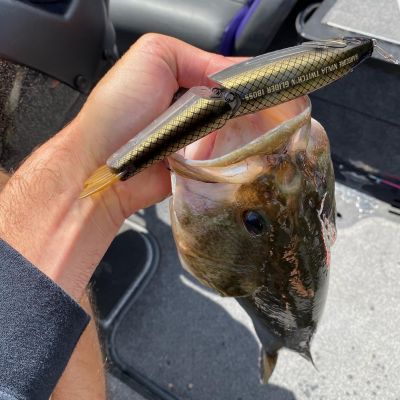 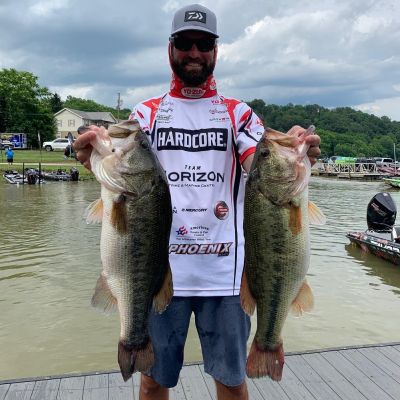 The glide bait lure category has exploded in recent years as anglers have learned just how well they perform and how many big bass they can catch with them. They are valuable tools for catching fish that are looking for a big meal.

Tackle Warehouse Pro Circuit pro Spencer Shuffield is a converted glide bait fanatic after seeing how effective they can be in cold weather while watching his forward-facing sonar and also during the often troubling post-spawn period.

This past season, Dustin Connell showed the world how well jerkbaits work with forward-facing sonar over brushpiles during cold weather periods when he won the Major League Fishing REDCREST.

It exposed a way of fishing that Shuffield had also been doing and he still uses jerkbaits in these scenarios but learned that the Hardcore Twitch'n Ninja Glider is another great option.

"The jerkbait works great for fishing with your Garmin Panoptix LiveScope, but I discovered how good a glide bait can be in the same situation pretty late last winter and can't wait to do it again this year," he said. "Throwing that big glide bait is a great way to get those big ones to commit. I don't fish it as fast as I do with a jerkbait and will let it get down a little deeper before starting to work the bait."

Ideally, Shuffield is looking for brushpiles in eight to 12-feet deep oof water and will try to keep the Ninja Glider roughly four feet above the object.

It is a big bait measuring seven inches long and two and 5/8-ounce and is a slow sinking lure.

"I'll let it sink down before working it or will also try fishing it closer to the surface," he said. "When I cast, I'll give it three of four fast reel handle turns to get it to get their attention and then use a dead steady retrieve. When they hit it, they'll slack line it like a big striper."

Shuffield has learned it is a great way to catch big fish and also show them something a little different. When everyone else is using a jerkbait, he thinks that going big can pay off.

"Now, many anglers have forward-facing sonar and they're all throwing jerkbaits over brushpiles," he said. "They've seen it work and now everyone's doing it. It's good to show them something different and is a good way to catch a big one."

RELATED: Here's Everything You Need to Know About the Twitch'n Ninja Glider

After the bass finish spawning, Shuffield believes a glide bait can be one of the best lures you can throw. The Hardcore Twitch'n Ninja Glider has accounted for some big bass for him when the bass are in a daze and still recovering from the rigorous spawning ritual they complete every year.

"I've had some really good success with it during the post-spawn," he began. "I hate that time of year and think it's the worst time of year to go bass fishing, at least around here. The glide bait is a great way to catch them when they are just off of the beds and pretty hard to catch."

Shuffield starts with where the bass spawn and heads slightly deeper as they progress to deeper haunts. He follows the movement of the bass and tries to intercept them with a bait that looks like an easy meal.

"I'll concentrate on the stretches right out of the pockets where they spawn," he said. "I also throw it a lot on the first points and focus on the mouth of those spawning pockets. I like the Ninja Glide because you can get it to dart left and right real quick and it has a great action that gets those fish to commit. I caught some big ones on it this past year and will fish it again this season."

As mentioned, this is a hefty bait and requires some stout gear to fish (and cast it) effectively.

Shuffield goes with an eight foot rod, an 805 Phenix Recon Elite paired with a 7.3:1 Daiwa Zillion reel. He spools it up with 20-pound Yo-Zuri T7 fluorocarbon line.

The bait comes in a variety of great colors, but Shuffield has a pair of favorites.

"I really like Metallic Ghost Ayu, which is also one of my best jerkbait colors from Hardcore," he said. "I also like their gizzard shad, which is a white bait with a black back that looks great in the waterx."

The glide bait has a reputation for getting inactive and pressured fish to commit. The large size appeals to a big bass that doesn't want to exert too much energy chasing a small meal. These two facts have made this style of bait so popular and earned a fan in professional angler Spencer Shuffield.