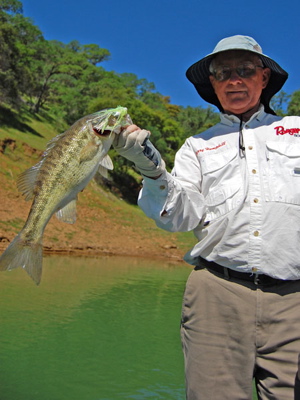 Every few winters, usually after a long dry spell, California is hit with a succession of very wet storms. After Thanksgiving in 2001, we had five storms in northern California in an eight-day period. In December 2002 after another long, dry fall season, winter hit with a vengeance – nearly a two-week period of storms – one of them a downgraded typhoon! This winter was unfolding just fine for bass anglers – plenty of rain but spaced apart. January was actually quite dry with some beautiful weather! February has brought a different situation – lots of heavy rain and a scary week to come. Clear Lake and Berryessa will experience some potentially very high water conditions. The Weather Channel has some rain showing for 6 days in a row, starting Sunday. While these conditions are great for the overall water picture in California, the short-term effects for the bass angler can be very difficult – but not impossible! Most of these very wet storms that cause huge lake inflows are sub-tropic in nature, bringing so-called “warm rain”. These storms can be dangerous and are often referred to as the “Pineapple Connection”. If the water muddies up but is not too cold, bass can be caught. However, if we have a series of Artic storms that are wetter than normal or have a serious snowmelt because of a tropical storm, as was the case in the first few days of 1997, we will have a cold, muddy water situation. That is the only condition that totally shuts off feeding bass, and you will find me home working on my tackle! This third week of February, 2004 finds our lakes with normal or above normal water temperatures and a mild weather pattern. So don’t put your rods away – bass can be caught! Here are a few insights on how bass react to rising dirty water and some ideas on where to look for them.

While everyone knows that dropping water levels send bass offshore, many anglers aren’t so sure what happens to bass when lakes – especially the Shasta and Oroville type reservoirs – rise quickly, sometimes five to ten feet a day!! Obviously, feeding habits of the long fall season come to an abrupt end, and suddenly their house has a taller roof with lots of new upstairs rooms! While feeding activity may slow to a crawl for a few days, bass will soon adjust as they begin a slow migration to the bank and follow the rise of the lake or pond – moving shallower than they were in the fall. Rising water is not the reason for this relocation. The change in water from clear to dingy and then muddy upsets the feeding equation. If the body of water could rise quickly but remain clear, much of the offshore feeding on baitfish and trout would continue. But that’s not how it works. The first heavy inflows of the winter season always bring in dirty water, even in rocky areas.

Once the water turns murky, bass have to give up chasing bait since they can no longer see that well. Besides, their metabolism is usually slowing down around the time of the first storms. So they become structure-oriented again and feed more on the bottom or ambush food that comes near their structure. They need structure to orient themselves – they need to be “close to or next to” something like a tree, bush, piling, rock wall, roadbed, ledge, hump, creek channel, or steep point. The muddier the water, the closer to the structure the bass will be. These fish can be caught with baits that offer bulk (move a lot of water), baits that are bright (chartreuse), and baits that vibrate. Jigs, brush hogs, thick zipper worms with brass n’ glass, spinnerbaits and crankbaits are among the most effective lures to use. Flippin’ was made for these conditions! For example, flip a Rattlin’ Weapon or Rodstrainer Jig (black) with a single tail five or six inch Yamamoto grub (chartreuse) in a bush, bring it up to a branch and shake it for all you’re worth. Hold on!!

We know that bass do not like muddy water passing through their gills, and they will immediately search for cleaner water. That cleaner water is where you want your lure to be! The first area that bass will discover is the source of the inflow. That is often a source for food and the first area to gradually clear after the rains stop. Often the creek or river will clear completely or partly in a matter of days. This will push a mudline out into the cove and bass will follow this mudline, using it as an ambush area. If conditions are good, the bass will often move right into the clear water to feed. Late afternoon is often the best time to fish this clear water condition. As long as the incoming water is not snowmelt, the bass will be quite aggressive, hitting a jig with a big “thump”! At least they do at Lake Amador!!

During my seminars at the 1997 I.S.E. shows, I used the first five minutes talking about muddy water conditions since the lakes were all “blown out” with heavy rain, huge snowmelt, and flooding. Everyone seemed glad that I talked about how to fish in these horrible conditions and seemed to be most interested in the subject I am going to discuss now. The problem is - where can you find bass before the creeks clear? Your whole lake looks like a bowl of chocolate milk! Not so, if you look real close!! Of all the structures I mentioned previously, bass seem to prefer bushes – and for good reason. The thick bushes not only offer good cover, but they act as a filter for muddy water. After two or three days of clear weather, look into the center of a nearly submerged bush. The water will be slightly clearer and that is where the bass will be – not on the edge of the bush – in the middle! Remember, a few branches will not do the trick. It has to be a bushy bush! I have seen this pattern work year after year at my home lake – Collins Lake – one of the bushiest (is that a word?) high water lakes I know. As a general rule, bass will be located lower in the bush during the early part of the day, but will move up near the top if the afternoon is warm. Try to pattern bushes that are near a ledge or steep bank – they hold the biggest bass. The tulles at Clear Lake will do the same thing – filter out muddy water. Bass will move as far back in the tules as they can because the water will be cleaner after a few days. Weedy areas will also offer a filter effect.

Something else to keep in mind is to analyze areas that don’t have incoming water. Those areas will usually get dirty last. Most of these spots will be near the lower part of the lake, in other words, near the dam. Some of the last clear water available will be near the dam because of no major runoff in that area. Sometimes a canyon wall area that has no creek inlets will give you another day of fishable water. As a rule, all species of bass will be found in the top fifteen or twenty feet of water in a lake if the water turns muddy. Hanging out in total darkness below that level is not their idea of fun. As the water clears or if it only becomes dingy, bass may be found deeper. Watch your meter!

Remember too that bass are looking for sunny days beginning in late February. Sometimes a day or two of sun will make them more active and cause a shallow water movement, especially in the afternoon. The sun is now high enough on the horizon and out long enough to start warming the water later in the day.

I will close with a word of encouragement: rising muddy water can happen at any time during the winter, but after the first round of general murk, the next series of storms doesn’t usually cause as much problem with dirty water. It is sort of like the first rain of the winter on a highway when all the oil and grit comes off. It’s not as bad the second time. If you concentrate your fishing efforts on the cleanest water you can find and use flashy, bulky, noisy baits, chocolate CAN be good for you!