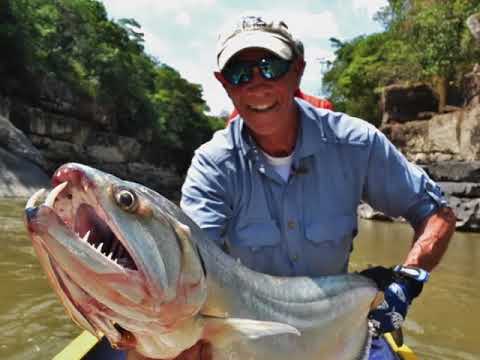 Many people applauded Costa Rica for outlawing shrimp trawling in 2018. The new ruling has survived many court challenges and even today the shrimp industry and INCOPESCA, the government agency that manages the country’s fisheries, is conducting technical studies on alternative sustainable methods of trawling.

Henry Marin, a social economic expert and project manager for FECOP, the sport fishing advocate and promoter of sustainable fishing in Costa Rica, understands the whole picture when it comes to conservation advances. “Most people don’t realize that the ruling displaced 300 women in Puntarenas who worked as shrimp peelers. Most of them are now unemployed and many were the head of their households,” Marin says.

Larry Dahlberg, the legendary angler, lure maker and host of the television show Hunt for Big Fish was attending the American Sportfishing Association’s ICAST tackle show when he met Marin. The two men struck up a conversationon a topic important to both—fisheries conservation. They agreed conservation includes social aspects, often at a cost including lost jobs. Marin explained the shrimp peelers’ plight.

Marin’s recent study of coastal communities in Costa Rica showed sport fishing contributes more than $500 million to the country’s bottom line, or 13 percent of all tourist dollars spent here. Many of the people working in sport fishing used to work in the commercial fishing industry, which shows how conservation can have a positive aspect as well.

Marin started the legwork months ago when he contacted the women’s group to find if there was an interest in the lure-making venture. INCOPESCA and INA, Costa Rica’s technical institute, held additional meetings to seek collaboration. All parties were eager to participate.

Dahlberg enlisted the help of several industry experts. Mike Faupel, president of Alumilite Engineering Company that owns Makelure.com, Amazing Casting Products, suppliers of molding and casting gear and Brad Roberts, a well-known lure maker and owner of Jaw Sportswear, were enlisted. The three will be spending the last week of February in Costa Rica training a group of the former shrimp peelers as well as five INA instructors to establish a formal training program.

The group will be making hard and soft-plastic lures for sale in Costa Rica, with plans to develop a biodegradable version, too. After the molding process is mastered, the offerings could expand to other products such as tourist souvenirs for the cruise ships that routinely visit Puntarenas.

The project will not be the total solution for the unemployment of the displaced 300 women. But if the project is successfully executed, the resulting co-op will employee a significant number. Marin understands this is only the first step. “They will need help learning how to manage a business and INA has plans to include this in the program. Volunteers are invited to participate, especially university students in business administration or with knowledge of 3D printing looking for a community project.”