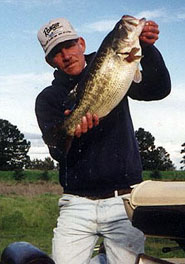 For many years I've watched a lot of Delta fisherman try and learn this river system that we in Northern California enjoy. I've been asked, “How did you learn the Delta so well”, the answer to that is the older system. Over the years I've explained to clients to weekend fisherman an easier and a more systematic approach to learning and understanding what the fish do in the waters of the delta.

With these two ways though, you have to know before you hit the water the basics of bass behavior. Seasonal patterns (time of year), in relation to what the bass are doing, water temperature has a factor as well as weather.

To start with, the first way is for the Delta enthusiast that fishes occasionally but would like to compete with knowledgeable year around anglers. First, get a map of the Delta, either in a local tackle shop or go to Google's Earth and find the section or sections of the Delta that you would like to learn and hit map and then print it out.

Next, get a box of marking pens in various colors, as many as you want because you may need them all, depends on how well you are determine to learn the delta. I will start with the spawning season. Pick a color of your choice and mark the flooded Islands such as Franks Tract, Mildred, Little Franks for example or any area that you would deem spawning area. Second, take another color and mark the deepest section of water around the area. Next colors; mark the deepest section that has the most moving water to the least subtle of moving water. Break this up with two colors.

You should by know have a picture of how the majority of bass get into a spawning area and how they may relate to moving water to calm water or subtle movement. This time of year you want relatively quick access to deep water once the spawn is over. Deep access varies in different parts of the delta. It can be 20-30ft in rivers, tributaries 15-20ft and sloughs or cuts 12-18ft. All are important to know in the section of the delta that you choose to fish or learn.

Summertime bass is a time of fast action and gigantic explosions. But it can end just as fast has it started. The reason simply stated is a tide change. Here again is almost the same scenario has the spawn but they have to have quick, and I'll repeat it again “quick” access to “deep” water. Reason for this is the water has resin above the 68 degree mark, water clarity is clear and the weather pattern is generally if not all the time clear of clouds with the temperatures stable. Here you go to the areas that you have marked with deep access and look at the distance of travel a bass would have to go. The area should be immediate accessibility.

Fall generally has moderate to fast moving current. Weather systems are becoming less stable and are a lot colder at night, telling the bass its time to feed up for winter. Here you want to pick out areas that have fast moving water to moderate moving. Points at high tide, inside bends of rock walls or half moon shaped tulle berms in general are key areas in fall. Most of the areas mentioned above have deep access and you want to pick areas closer to or in river channels or tributaries. Tributaries can be Connection Slough, Disappointment, Middle River or Lathrop for example. All these areas have the above-mentioned structure.

Dead winter is one of the hardest times of year to find bass that are feeding. Here you want to pick another color and mark areas that have slow moving water to almost no water movement.

Water temps have dropped to 47-48 degrees. The bass's metabolism or feeding habits have gone to nil. Weather is near freezing at night and during the day it maybe in the high 40's to low 50's. You want to pick areas out that have moderate moving water and at least 25ft in depth adjacent to calm sloughs or cuts. Example, behind Orwood where there’s fast moving water, Woodward, Little Potato and Seven Mile sloughs. The best areas that are known have deep moving current at both ends.

I hope the above helps the occasional fisherman or serious tournament minded angler from out of the area to catch quality bass in the Delta.

Now, to get to the older version of learning the Delta you need more markers, ha ha!!! This next part is for the avid 12 months-a-year anglers on the Delta whether you want to fish tournaments or just for fun and want to be good at it.

Assuming you did the above, great!!!

Now mark the map into 4 to 5 sections, look at the area that you have marked up the most and we will begin there.

The most important tool on your boat is the front depth finder. It doesn't have to be expensive. In fact, the best depth finder ever for the Delta was the old Hummingbird Super Sixty. Reason it was, today’s standard depth finders have LCD's that are a second or two behind the actual depth that you are at when you read it and the Super Sixty wasn’t behind at all. So you will have to take that into account. You’ll have to be on the water or have a great memory for detail for what is coming. The best way to learn an area is at low tide. I'll start by telling you to look at the weed line and read it. It will tell you a lot about where the bass are maybe and where the deep water is in relation to the main bank or berm. This is deep water access to the fish for that immediate area. Bass in general feed vertically on the Delta because of the flexibility of the tides. In my opinion, when the bass in general move it’s because the tides move them horizontally. And the bigger of the bass in the area will generally move first and will feed deeper than the general population of fish in a given area.

Depth is one of the key factors in catching quality bass throughout the year. The bigger bass feed in 6-12 feet of water the majority of the time. This is where the depth finder in front of the boat becomes your main tool.

What you do now with the color marker is mark the section of the bank that has the deepest access in relation to the bank. Another area to work is the outside tulles. These tulles may be sparse but they’re on the edge to deep water. So watch for sections in the bank where the tulles become thicker in stock. This is another tell tail sign of deeper water in a given area.

I find that the majority of the fishermen that are learning the Delta are fishing to close to the objects or structure they’d like to be fishing. Hint, stop way before you even think about making the first cast and go in with the trolling motor and watch the depth finder; you will be surprised at what you’ll see. Its called ledges, breaks and drop offs, which all indicate depth.

Once you completely learn this area of your choice, move on to the next section and repeat. In time you will have more water to fish that you could not fish in one day or a week.

This article is written so at least you will have a starting point. From here it gets a tad bit more technical and an even greater challenge to the avid bass fisherman, where patterns develop and disappear as fast as the tide changes. Ledges, breaks and drop offs are very important out on the Delta, so watch your depth finder.

Buck Perry in his famous book “Spoonplugging” made particular reference to DEPTH, SPEED, and then COLOR. It holds true for today’s anglers as well.

Good luck to All