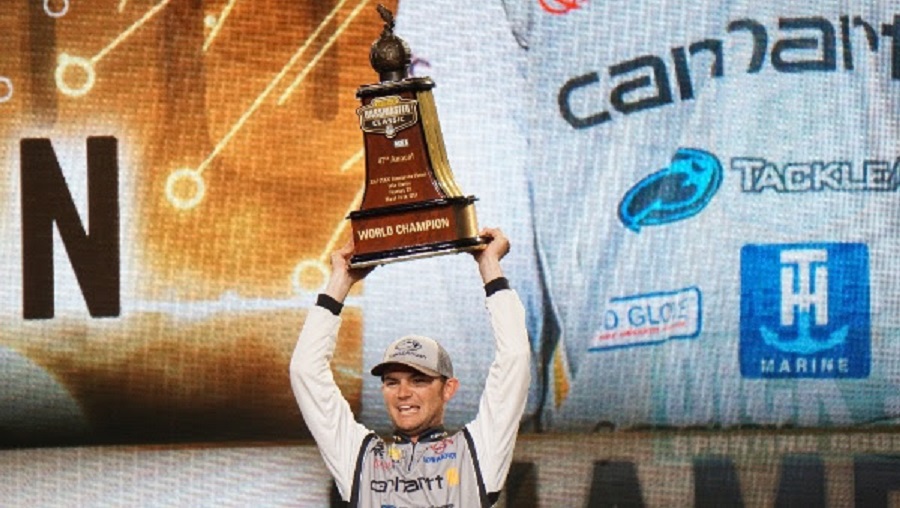 Tulsa, Okla. – Lowrance®, a world-leader in fishing electronics since 1957, continued its domination of America’s tournament-fishing circuit as Lowrance Pro Jordan Lee won the 2017 Bassmaster Classic Championship on Lake Conroe in Houston, Texas last weekend. A 25-year-old professional angler from Guntersville, Alabama, Lee became the sixth consecutive Lowrance angler to win the Classic when he finished with a three-day total of 56 pounds, 10 ounces, taking home $300,000 and the most coveted trophy in the sport. Steve Kennedy, who also competed in the event with Lowrance marine electronics, finished second with a total weight of 55 pounds, 1 ounce.

On the final day of the Classic, 15 of the top 25 competitors — including seven of the top 12 anglers – were using Lowrance HDS fishfinder/chartplotters to navigate and find key fish-holding areas. For Lee, 2017 was his second appearance at the Bassmaster Classic. He finished 6th in the 2014 Classic at Lake Guntersville in Alabama.

During last week’s practice at Lake Conroe, Lee used HDS-12 Gen3 with StructureScan® 3D imaging to identify an underwater “point” with a hard-bottom area that he thought would hold fish. He returned to the spot on the final day, where he was limited by mechanical issues on his boat, which held him in the same spot all day. Staying in that spot proved to be the difference as Lee jumped from 15th to first place with a 27-pound, 4-ounce, five-fish limit, the biggest single-day catch of the tournament.

“It actually helped me out,” Lee said. “I got to where I wanted to be. That’s all that really matters. I knew what the potential could be. It wasn’t like a big drop or anything; it was just on a point in the mouth of a cove. They (fish) were all around that hard bottom area.”

“All of us at Lowrance congratulate Jordan on his amazing performance and well-deserved win,” said Leif Ottosson, CEO, Navico. “We are proud to know that Lowrance has continued to play a key role in winning the last six Bassmaster Classics, and that Lowrance is still the number one brand of marine electronics at the Bassmaster Classic and Bassmaster Elite tour. For 60 years, the key to success has been driven by Lowrance sonar innovation and our commitment to deliver meaningful benefits for anglers.”

The 2017 Bassmaster Elite Series continues on April 6-9, as anglers will compete on Toledo Bend Reservoir near Many, Louisiana.

For more information on Lowrance and its tournament-winning fishfinding technology, including the award-winning StructureScan 3D, or to locate an authorized dealer, please visit www.lowrance.com.