Now that StructureScan 3D has been installed on boats and ran all season long, we are seeing the real-world results. Kirt Hedquist is a Lowrance and Navionics pro staff member and frequent host of seminars and webinars on electronics usage. He shares some of his screen shots from this season and what he was able to see with the help of StructureScan 3D.

Like any other new technology, StructureScan 3D has a learning curve for someone just starting to use it. Hedquist likens it to the first time he used StructureScan and began to view things to the left and right of the boat.

“The biggest thing is to get out and spend time on the water with it. Also, going to a lake with plenty of baitfish and structure will help speed up the process,” said Hedquist. Using it for the first time on a body of water with a flat, featureless bottom will not allow an angler to use it to its full potential.

Hedquist also recommends adjusting the settings and finding a color palette that makes it easy for you to interpret what is seen on the screen. “After using it all season, I am seeing that 3D is definitely finding its place as a compliment to the other Lowrance technologies,” he added. “What I really like about it is that you can see where the fish are in relation to the boat and more importantly where they are setting up in the water column.”

Another change he makes is to rotate the boat on the screen for new views and to see more of what is around you. “I have that the view set to straight behind the boat most of the time to see how the fish are positioned below the boat.” 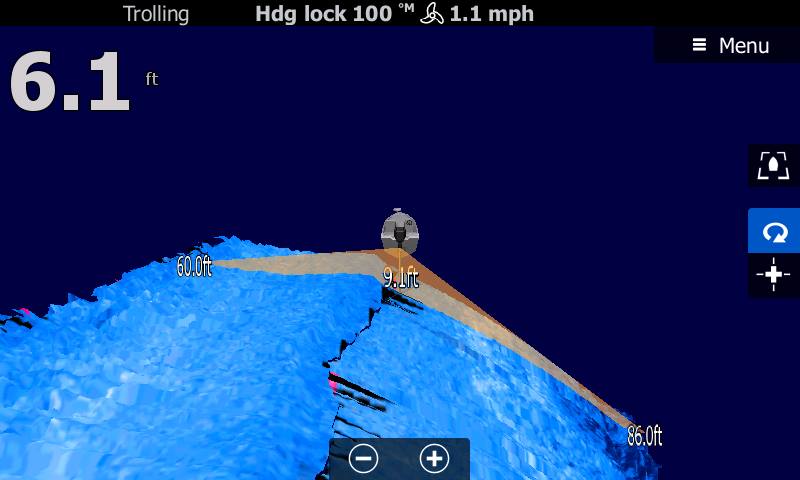 In this image, Hedquist is moving along a shoreline. “You can see how big of a drop it is off to the right of the boat. You’ll also notice there are no weeds and it is fairly featureless,” he said.

The brighter pieces on the right of the boat indicate a harder bottom and are rock or some type of hard structure. The harder return on the sonar indicates a harder bottom and the result is a whitish color and can be seen in several of the other images below. 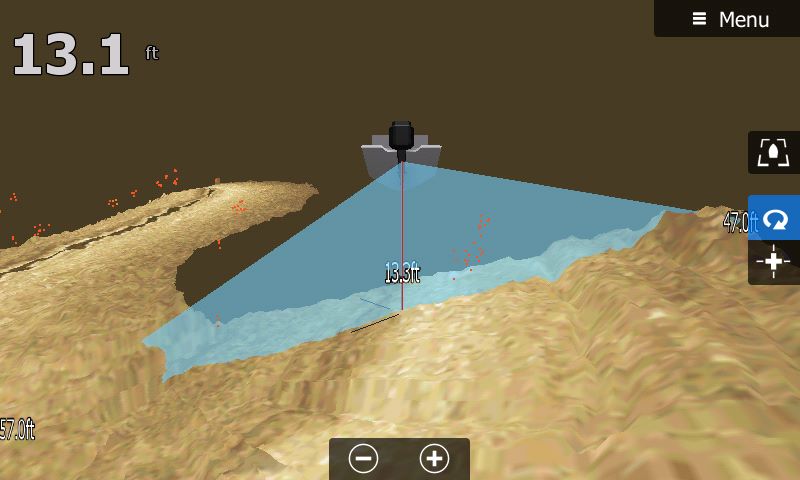 This screenshot shows a group of suspended baitfish under the boat on the right side. “If you look at this closely, you can see where I turned the boat around and started going back to where I started, almost like mowing grass. The shallow contours and a ridge on the right and to the left you can see a drop,” said Hedquist. 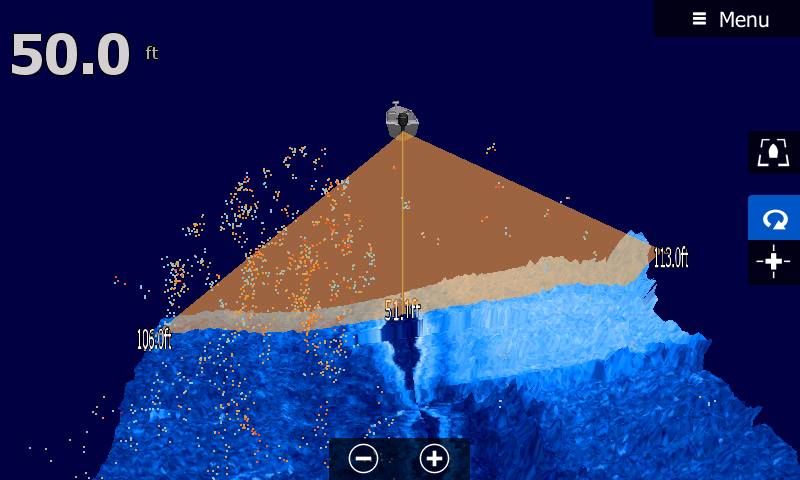 The image shown here is a classic example of a transition area. The area on the right of the boat shows a defined line where the color changes from blue to a more white color. “This is where the bottom changed from a softer bottom to a hard bottom. You’ll also notice a large group of baitfish suspended to the left of the boat,” he said. 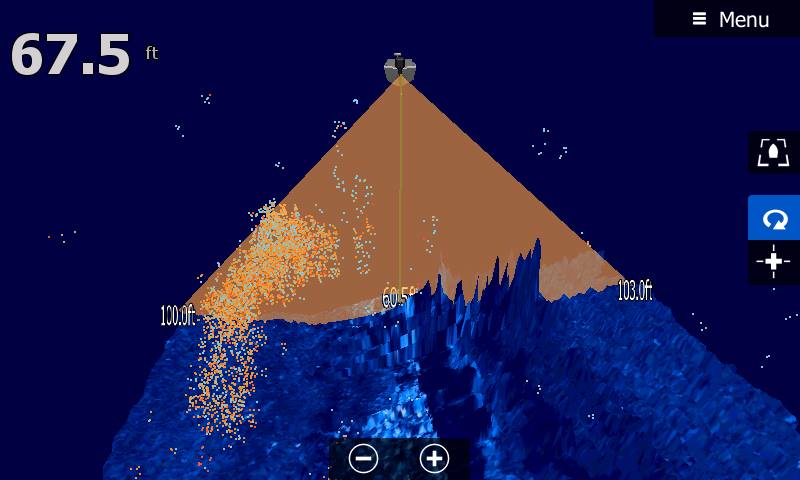 This deep-water image shows a large school of baitfish. “There is also a ridge right below the boat and this is a great example of how StructureScan 3D will show how deep the baitfish are suspending. You can easily scroll over and mark a waypoint on exactly where the baitfish are,” he said.

The next two images were shot showing the same structure with multiple views. The image of the 2D and DownScan show the baitfish suspended right before a drop in 35- to 45-feet. 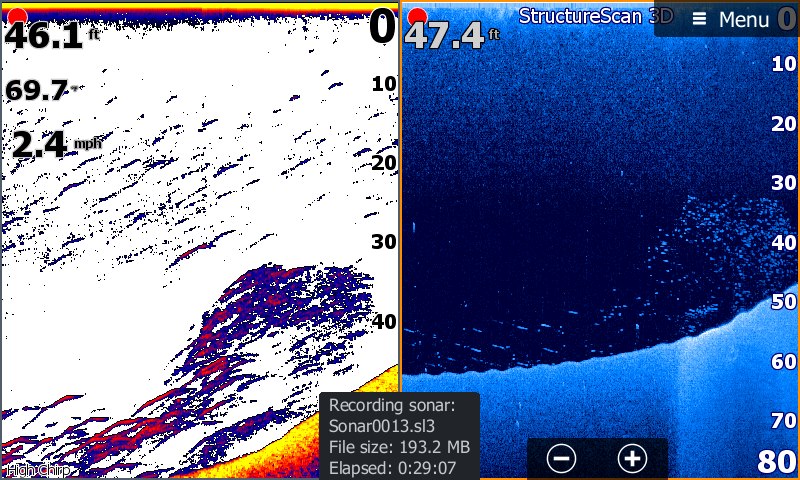 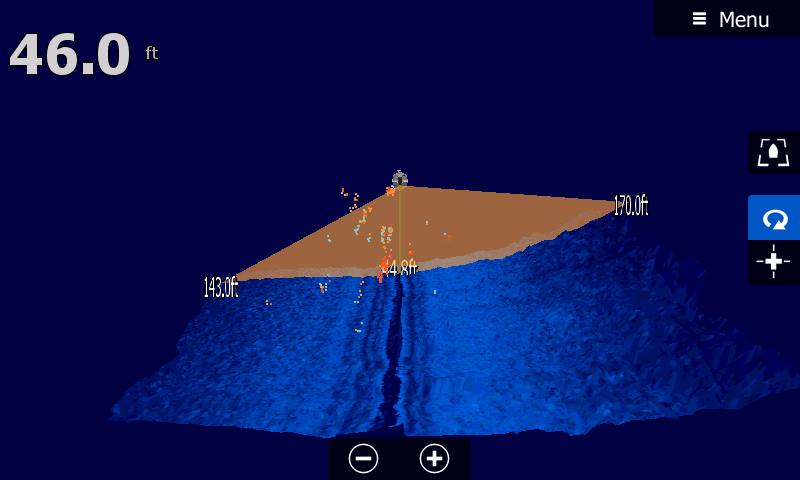 The StructureScan 3D image shows the same view but gives more detail as to how far away from the boat the baitfish are.  “You can also see the taper of the bottom and with SelectScan Target ID you are able to determine which fish are baitfish and which dots are predators based on the color they show up,” he said.

In addition to the 3D feature, the standard StructureScan also received an improvement with the new transducer and module that is needed to run 3D. “It has made the images much more crisp because there are more crystals in the transducer. It is a tremendously better image,” said Hedquist.

Getting the most out of your StructureScan 3D requires time on the water and adjusting the settings based on your own preferences. By analyzing the screenshots below and understanding what your Lowrance unit is capable of you can now locate more fish and structure that you may have missed before.