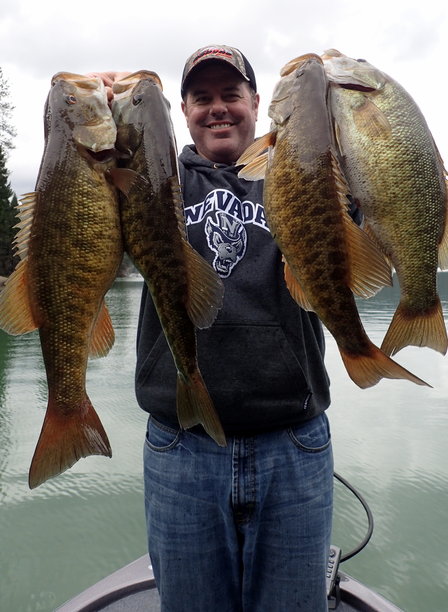 few months (especially January and February) a few family members and friends decided they had to get in on the action. So we loaded up, and headed to Trinity for a little “March Madness” of our own. And yes, it was truly a “Trinity Experience.”

Once again I was reminded that something about this lake is so very different than Folsom, Shasta Oroville or Berryessa. Trinity is loaded with fat healthy BIG fish, especially Smallmouth. Local guide, John Gray of “The Maine Guide Service” thinks that the fish are especially chunky on Trinity from the unlimited supply of stunted Kokanee that swim the lake freely. Four-pound Smallies are not a rare occurrence at all on Trinity, and three-plus pounders are, dare I say, the norm. It is mind-boggling.

On the first day of our two-day trip we focused, as we did in January and February, on deeper fish 15 to 35 feet down with slow plastics. Five of us, fishing from two boats landed a respectable amount of fish with 4 and 6-inch smoke colored worms and 3.75-inch brown tubes fished slowly on ¼ and 1/8 ounce darter-heads. Like in January and February we worked the rock piles at the north end of the lake across from what used to be Trinity Center’s ball field. But we also caught some fish in more traditional places such as off of shoreline structure and cover: primarily rocky walls and tree stumps.

As far as guides go, it is tough to beat John. He was willing to guide four of us even though we were in two boats. He worked his tail off. We concluded the first day, as I mentioned, with a nice amount of decent sized fish. We each caught between 5 and 15 fish and there were a couple of three-pound fish in the mix. It would have been a great day on an ordinary California impoundment, but admittedly a sub-par Trinity experience.

Day two began differently. John wanted us to toss reaction baits like the Lucky Craft Staycee Rip and a Clown-Colored Rogue early and often much closer to shore than we had on Saturday. I thought, this could be fun. I’m tired of all of the “slow” fishing we West coast bassers have to undertake in our cold winters and hot summers. I thought, it is spring! It is time to fish faster, move around more and run and gun a bit. So we did.

We tore their lips off. It boggled my mind. I kept asking myself, “is this the same lake as yesterday?” We had tried reaction baits the day before and caught only one or two fish on them. According to John, this is typical on Trinity. It is typical to follow a slower day with a red hot one. “This can be a very tough lake on any given day, but it is almost never tough two days in a row,” John said.

The two of us in my boat, for a 90-minute stretch, participated in what seemed like and endless progression of cast, twitch, pause, RIP, pause even looonnngggeeerrr … WHAM … fish on! Remove fish, if greater than 3 pounds, toss in live well for later photo and safe release. Now cast again. I couldn’t keep track of the numbers but our thumbs were sore, and we caught something like 15 fish in less than 60 minutes.

And the nicest part of this is that these are not the Cloneville Spotted Bass we catch on many of the other Reservoirs in Northern California. No, the Trinity Fish are chunky footballs stuffed to the gills with Kokanee and inordinately large crawdads. These fish are well fed and feisty. I agree, Spotted Bass, even with their smaller size do fight viciously. But if Spots fight viciously, the Trinity Smallies fight like wild Badgers tearing each other’s eyes out over the last morsel of a dead cottontail. (Okay, I saw this once on a PBS nature show as a kid and it left an impression.)

The cold-front and rains we had during the 3rd week of March did slow the bite on Trinity a bit as it did on many of our other lakes. But in John’s last report on Trinity from Sunday, March 27, the big fish were once again shallow and in a most-aggressive pre-spawn phase.

So, if you get a chance to head to Trinity this Spring, be ready for some voracious Smallmouth action.

John F. Gray (The Maine Guide) can be contacted at (530) 623-4352 or visit his website at www.snowcrest.net/themaineguide