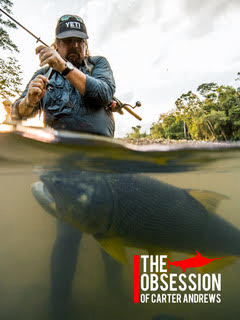 Carter Andrews is not into fishing for recreation, money, fame or records. He is into fishing because he has no choice. He is a victim of an all-consuming obsession – one that has him on the water with friends and family 300 days a year, from Costa Rica to the Snake River; Florida to Bolivia. His obsession and relentless pursuit of the greatest game fish in salt and freshwater gives his fans an informative and action-packed adventure every episode.

Carter has a fly-fishing resume that reads like a Hall of Famer’s: three wins of the Jackson Hole One Fly, countless video and print references, a keystone spot on the U.S. Fly Fishing Team… but it was a trip to the Bahamas that introduced ‘Big Boy’ to the great big world of destination saltwater angling. For the next decade he would help build fishing lodges, train guides, and lead exploratory fishing expeditions, not only in the Bahamas but across the globe. Carter became the cover shot of nearly every saltwater and fishing magazine in print, and grew to be a favored guest on fishing shows and videos.

By splitting the year between Panama and his ranch in Jackson, Wyoming, Carter manages nearly 300 days of fishing annually. He continually innovates and progresses techniques and approaches that the others do not. This has earned him the reputation of being the most ‘complete’ angler on the water today.

About World Fishing Network: World Fishing Network is North America’s only television network, online and mobile platform dedicated exclusively to fishing and outdoor enthusiasts with programming that covers instruction, tips, tournaments, travel, food, boating, outdoor lifestyle and more. Available to cable, satellite and telco subscribers throughout the United States, Canada and the Caribbean, our lineup includes a selection of the best North American and international series and the most diverse species coverage of any TV channel hosted by some of the top anglers from North America and across the globe. For more information, please visit WorldFishingNetwork.com and follow us at Facebook and Twitter. #MyOutdoorTV