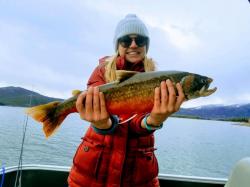 SUMMIT COUNTY, Colo.- One of the largest reservoirs in Colorado has produced a new state record arctic char, caught by a vacationing physician from Virginia, Nov. 6.

Dr. Lindsay Regali of Charlottesville had been taking in the sights and enjoying a chilly day of fishing at altitude in Dillon Reservoir with her husband Luke Newcomb and local guide Randy Ford of Alpine Fishing Adventures when she landed the lunker. Colorado Parks and Wildlife certified the fish as the new state record, weighing in at 4.15 pounds and 23.5 inches in length, breaking the previous record of 3.75 pounds and 20.5 inches, caught in Dillon Reservoir in 1994 by Marshall Brenner.

"There was an ongoing joke throughout the day that I was jealous of how many fish my husband had been catching," said Regali. "I was laughing and joking around because I realized I had finally caught one that I knew was bigger than his. I realized it was big but had no idea how big until we got it in the boat."

Regali, a self-described casual angler, had initially been interested in the sights surrounding Dillon Reservoir more so than what lay beneath the surface.

"It was such a fun, unique experience to be fishing with snow coming down, surrounded by the Rocky Mountains. It was almost surreal," said Regali. "Mostly, it was just a lot of fun and it was something I'll definitely want to go back and do again."

With the reservoir now yielding bigger specimens of the fish, a cousin to salmon and lake trout, CPW considers the stocking program a significant success.

"This has taken a lot of patience because they are growing slowly, but we seem to be at an inflection point in the fishery where I expect to see increasingly large fish, and more of them," said Area Aquatic Biologist Jon Ewert. "The one Linsday caught was a nice, large fish and it's very satisfying to see the excitement that it brought her. I'm sure news of the catch will attract other anglers to Dillon to see if they can break her record."

Ewert reminds anglers about a regulation for arctic char in Dillon Reservoir; "Anglers can keep one fish over 20 inches. All arctic char less than 20 inches must be returned to the water immediately," he said

Regali, whose father taught her to fish as a child, says the experience of catching a state record fish will remain with her for a lifetime.

"I immediately texted my parents from the boat and sent them a picture. I knew my dad especially would think it was pretty cool," she said. "I still can't believe it. I just went out there to have fun. I certainly didn't go out to set a state record. It's a good story to tell."

Dillon Reservoir is the only public body of water in the lower 48 states, outside of Maine, in which arctic char can be caught. Most populations are found in Canada and the arctic regions.

For more information about fishing in Colorado, visit CPW's website.