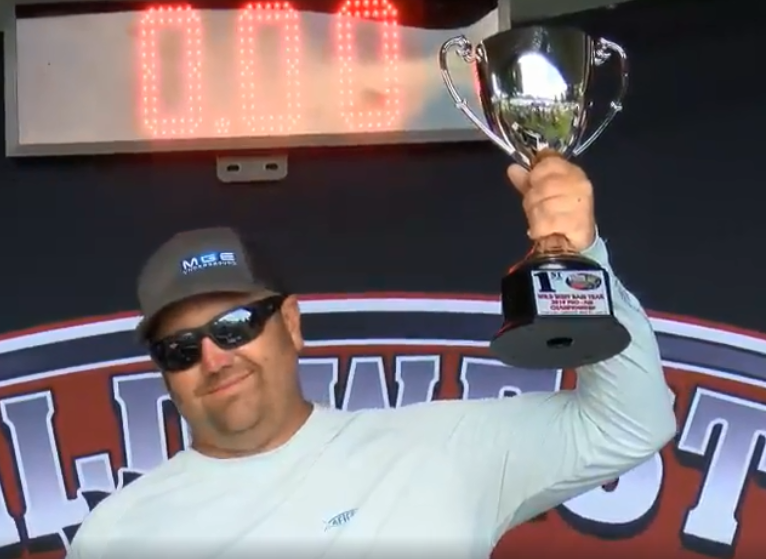 The victory was claimed with a tournament-total of 60.95 and marked Salvucci as one of the two anglers to carry the title of 2-time WWBT Western Classic champions (2017, 2019).

Bryant Smith is noted as the other angler with two trophies from the WWBT Western Classics (2016, 2018).

“I have a good average in the events, winning two of the three Western Classics that I’ve fished, “noted Salvucci. “I am glad that it happened on Clear Lake. It is one of my favorite bodies of water.”

Salvucci credits his win to a practice catch and committing to an original plan.

“I stay in one area,” he revealed. “I hardly ever do that. Especially at Clear Lake.”

His area kept him in the south-end of the lake, targeting heavy vegetation in the Rattlesnake arm.

“I’ve never NOT fished up north in a Clear Lake tournament – not ever in my life and I’ve been fishing tournaments on that lake for 20 years; but I practiced for 2 1/2 days up north and a half a day down south and the quality of fish I found down south was so much better, I just couldn’t leave,” added Salvucci. “I made the plan to stay on the south-end and figured it was either going to work out good for me – or it was not.”

The majority of Salvucci’s weigh fish ate a punch-rig, with only two falling to a vibrating jig.

“Day one, I had almost 20 pounds,” recalled Salvucci. “After weigh-in, I looked at my livewell and I had these giant, four or five-inch, lobster-looking crawdads that were bright red; so, when I got back to my house that night, I tied up a ChatterBait. I hadn’t caught a fish on a ChatterBait all week; but I tied up a green pumpkin/red one.

“That next day, I started off flipping and frogging in the morning and went about an hour and a half with no bites. Then, I picked up the ChatterBait and in my very first cast was a 5 1/2 pounder. Then, I caught two others – a 3 1/2 and a smaller one, but I took both of those fish to weigh in, so that was pretty much how I mixed up my rotation on Day Three. If I didn’t have that premonition and follow my gut after Day One, I don’t think I would’ve won.”

Salvucci threw three different punch-rigs – two with one-ounce weights and one with a ¾-ounce weight. He used a G-Money Punch Skirt with Reaction Innovation Beavers and Strike King Rage Bugs in a black and blue and green pumpkin.

He used a Jack Hammer vibrating jig in a red craw color with a red Rage Bug as a trailer.

Salvucci beat out the invitational field taking home a new Ranger Z518 rigged with a 150 motor. 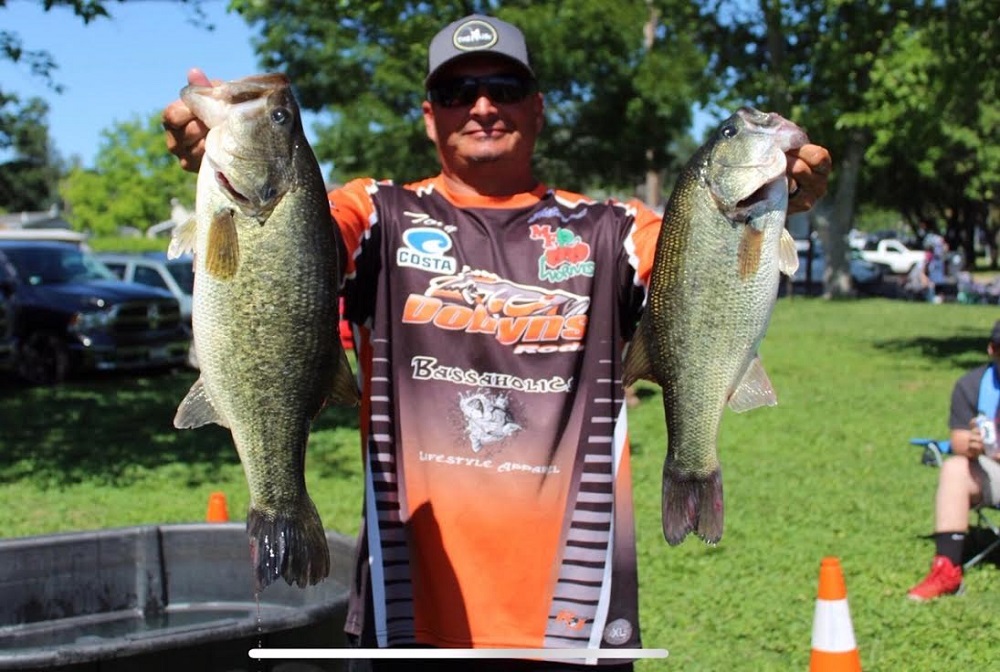 Redding, Calif. co-angler Tony Zanotelli took the top-spot on the co-angler side with a three-day total of 52.60.

He believes his versatility was the major factor in his win.

“Fishing with three different pros, you have to be ready for anything,” he said. “We were fishing everything from the very south to the north-end.  I had to do different things each day and make good decisions on changing it up.

“I think every bass tournament is won that way. Sometimes decisions pay off and sometimes they don’t. This week they did.”

His presentations varied throughout the day, depending on the fishing conditions he was surrounded by.

“I dropshotted on Day One in pockets and tules and it wasn’t even that good of a bag,” added Zanotelli. “On Day Two, I dropshotted early in tules and backwater stuff; but it wasn’t working out. I switched to a Texas-rigged worm and immediately started getting bites, including a couple of bigger ones. That really helped.”

“The last day, I started with topwater, made about 30 casts. I just didn’t feel like it was going to be the thing; so, I picked up a ChatterBait. I never put it down the rest of the day and it worked out.”

Zanotelli’s advice to other co-anglers was to learn many different techniques.

“As a co, you cannot be one-dimensional, because you will be doing different stuff with different pros every day,” he said. “Really a good co can do everything and knows when to do what. That’s the stuff you learn from being on the water with the pros.”

This is the biggest win for Zanotelli’s competitive bass fishing career which spans the past decade.

“I’ve had multiple second places; but never a win,” he said. “It really feels good to get over the hump!” 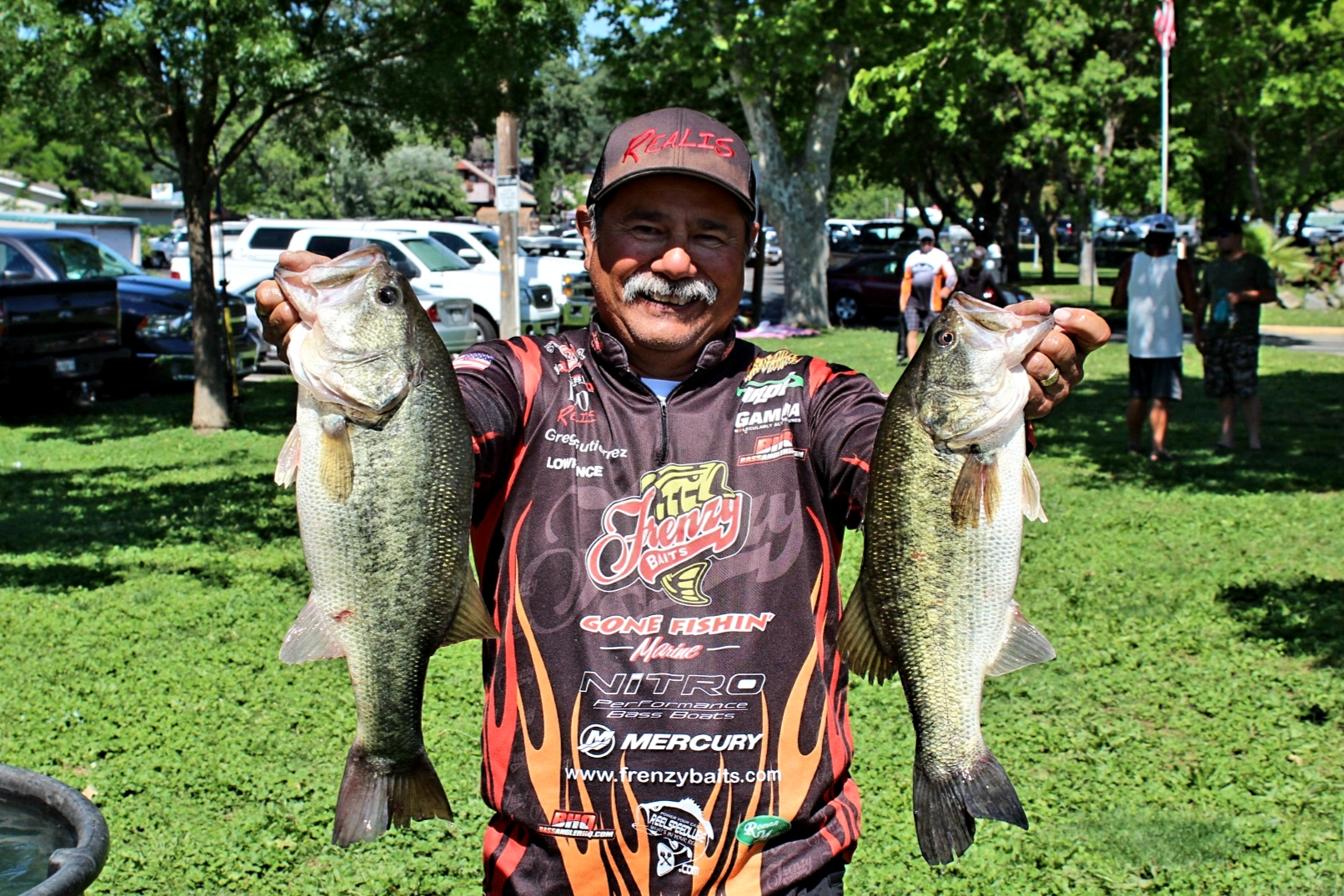 Gutierrez took the honor in true rockstar fashion, fishing his way to a top-5 in each Pro/Am event on every fishery throughout the 2019 season, including the Western Classic.

Gutierrez said trusting in himself was the key.

“I just got back to fishing the conditions versus all the other stuff that was going on and believing in what that information gave me,” he said. “That’s just what happened in this Clear Lake tournament. I got a couple of bites, listened to what the fish were telling me and began scaling down to where I was flippin’ a little tiny bait, but catchin’ bigger fish.

“Listening to myself, when I was talking to myself and making the adjustments that I was telling myself is really what it came down to.”

The win meant a lot to Gutierrez.

“You look at the competition across the floor and their accomplishments and you know what the AOY means,” he began. “It validates that I have a place on the water with the young hammers and can still compete. It means I am still viable and have plenty of time to fish. Every time I’ve gotten an AOY, it let me know that I’ve done something.”

The one lure that Gutierrez noted went through the season with him consistently was his signature, self-designed Frenzy Baits Nail.

“It really came in clutch in a lot of stuff,” he said. “It has changed a lot for me. I know that if I cannot power through and catch ‘em. I can go back with that more finesse presentation of the Nail. I also threw a lot of the Reaction Innovations Man Bear Pig and Flirt.