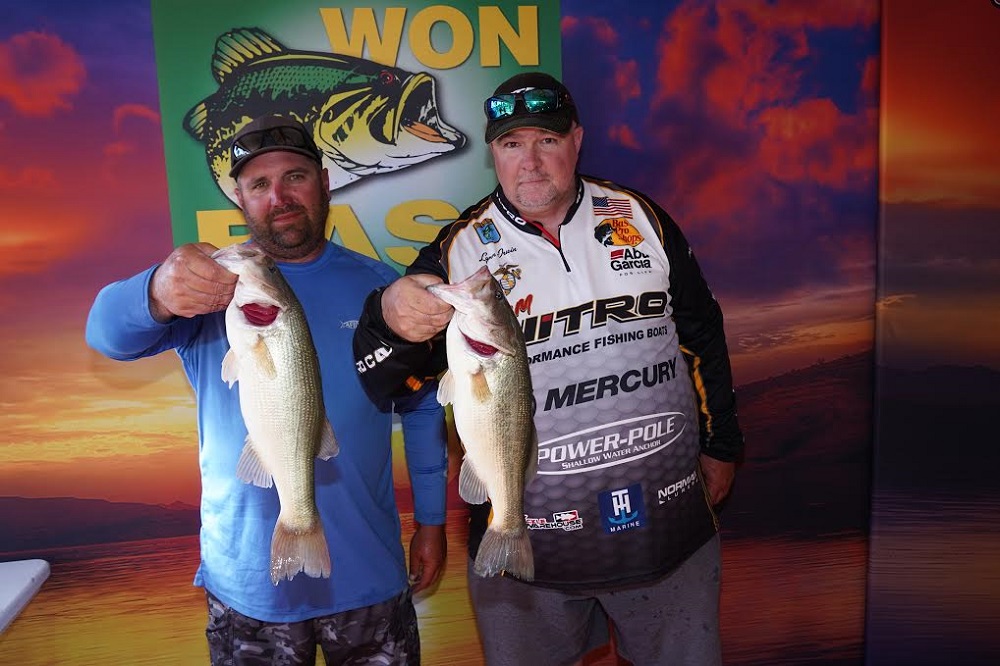 Las Vegas, Nev. – October 15, 2019 – While rough conditions can make it hard on the anglers at the WON Bass U.S. Open, Lake Mead’s black bass population thrives in the wind.  The problem for the field at the 2019 edition of the West’s most prestigious event, is that there has been very little to speak of.  Those conditions mean that there will be a limited morning bite, then a grind for the rest of the day.

After finishing day one in second place with 11.35 pounds, Nick Salvucci proved to be the most consistent angler on day two when he brought 11.19 pounds to the Calville Bay scales to bring his total weight to 22.54 pounds, enough to take the lead heading into the final day.  Salvucci and day one leader Justin Kerr swapped places when Kerr slipped, producing 8.05 pounds on day two, falling to second place with a total weight of 19.72 pounds.

That 2.82-pound differential can be massive on a body of water like Lake Mead.  That margin, and one more day of fishing stand between Salvucci and the title he has wanted so badly for the past two years.

Despite the strong lead, Salvucci said he is anything but comfortable.  “I really don’t know what to expect tomorrow,” he said.  “I am covering as much water as I can, but when I’m getting six or seven bites a day, anything can happen.”

Salvucci reported being able to pare down the collection of rods on his deck, but that junk fishing remained the name of the game on day two.  “I probably had 10 rods on the deck instead of 20, but I still caught fish on four different baits,” he said.  “I have to get out there and see how it goes; but anything could still happen.”

Kerr said that his day boiled down to one word – imperfection.  “I know that there’s still a chance, but I have to land everything that bites,” he said.  “My partner and I both lost fish today, and you can’t win if that happens.  My whole career has been about execution, and I’ll need to be perfect tomorrow to have a chance.”

The third place pro, Jim Moynagh, brought in 11.08 pounds on day two, a huge leap from his day one, 6.98-pound performance to bring his total weight to 18.64 pounds.  He is followed by two-time U.S. Open Champion John Murray, who added 8.97 pounds today to bring his total weight to 18.55 pounds, enough to leap from 10th place to fourth. Randy Estrada M.D. rounded out the top five by bringing 9.50 pounds to the scales to finish the day with 17.60 pounds.

On the AAA side Michael Fisher took the lead with 22.66 pounds.  The second place AAA Brandon Smith finished the day in second place with 20.29.  Teddy Snyder wound up in third place with 18.90 pounds.  Salvucci’s day two partner Lynn Irwin moved into fourth place with 18.65 pounds and day one Bo McNeely rounded out the top five with 18.53 pounds.

The final day of the 2019 WON Bass US Open will occur tomorrow, and the pro winner will receive $100,000 cash and the keys to a 2019 Bass Cat Puma FTD powered by a Mercury Pro XS 250 Four Stroke outboard.  The live broadcast, presented by Bridgford Foods and Life Source Water Systems will bring all of the action to you from the waters of Lake Mead, the weigh-in at Callville Bay Marina, and the awards ceremony from the Railhead Room at Boulder Station Casino. All can be found at http://www.wonbass.com.