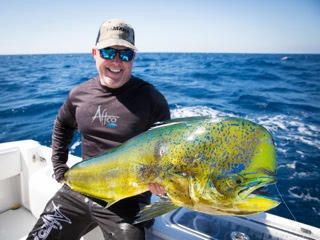 Miami, FL – Sportsman’s Adventures –– the first independently produced series of its genre to get the green light on Discovery  –– premieres its all-new season January 7, 2018. Then viewers can catch the #1 rated saltwater fishing show every Sunday, 8:30-9 a.m., January through June.

While new to Discovery, the show has been on the air since 1994 with each 30-minute episode highlighting a variety of fishing styles and sought-after species. “Rick’s knowledge and sense of humor create an edgy, entertaining and high-energy sports fishing experience. Every episode is jam-packed with personal fishing tips and the latest trends,” says Kathy Murphy, COO and Executive Producer with RM Media.

A South Florida resident his entire life, Rick Murphy spent his childhood fishing and hunting. As a licensed captain, he earned his reputation as a fishing expert in the waters of Biscayne Bay, Everglades National Park and the Florida Keys. Murphy is one of only two fishing guides in the country to ever win the four major Tarpon fly fishing championships. He has won tournaments and Angler of the Year honors in ESPN and Florida Pro Redfish Tournaments, and reeled in plenty of wins in the South Florida Sailfish Circuit as well.

“Discovery Channel is ideal for us,” says Capt. Murphy. “It provides a national platform to reach anglers of all ages who love to fish and want to fine-tune their skills to improve their catch. Plus, it promotes conservation and the outdoor community, which is what we’re all about. Sportsman’s Adventures is less about what I catch and more about sharing the adventure.”