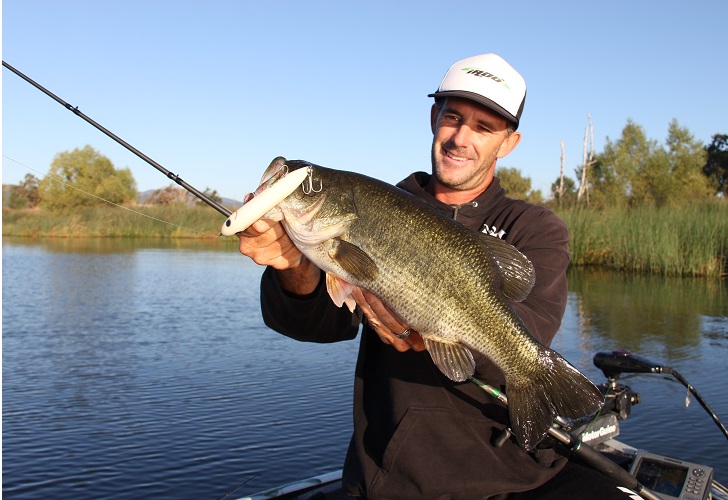 Matt Newman with a laregemouth that fell to topwater. Photo: David A. Brown

When's the best time to throw a topwater bait? Probably a lot more frequently than many might think. That's the word I got from Bobby Murray – the first Bassmaster Classic winner and bona fide topwater fanatic. Favoring Heddon's Spook lineup, Murray will sling his surface baits from the time spring water temperatures reach about 65 degrees, all the way through the fall when bass start targeting bigger baitfish.

"People think a topwater is just for catching fish in shallow water, but it's much more versatile," Murray said. "There are times in the spring when you can catch fish on a Spook in 4- to 5-feet of water. But there are also times that I can literally be sitting in over 30-feet of water, throwing over a deep hump or some submerged trees and have the ability to call that fish all the way to the surface." 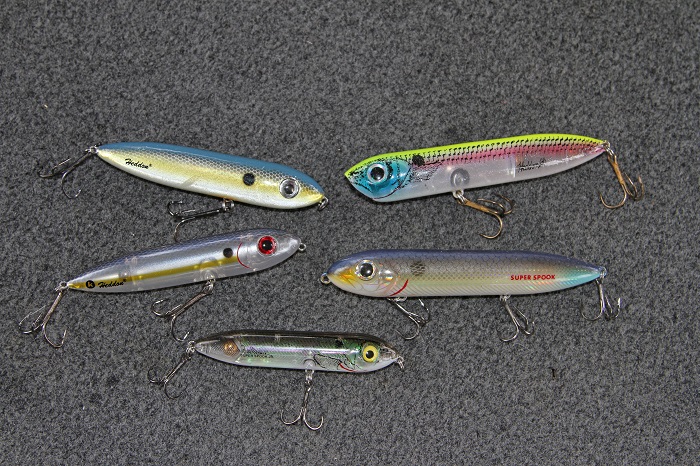 Because the fish's preference will vary from subtle to boisterous, savvy topwater anglers will fill their tackle trays with a mix of "walkers" and "poppers".  Walkers, like Murray's Spook, along with the Jackall Bowstick and Lucky Craft Sammy, generally feature a cigar profile with smooth, rounded faces. Designed to work back and forth with the classic "walk-the-dog" motion, these lures look like a wounded or disoriented bait wandering across the surface.

When the more active display fits the bill, poppers/chuggers like the Yo-Zuri Sashimi Popper, Strike King Spit'N King, Storm Chug Bug, Rebel Pop-R and the XCalibur Zell Pop feature concave faces that push water when snapped across the surface. From spittin' to chuggin'; poppin' to bloopin' – this commotion announces the bait's presence in unmistakable fashion.

Sound can, at times, enhance the appeal of any hard bait, but all audible accents are not the same. The generic term "rattles" suffices in basic conversation, but there's more to it. The fact is that some topwaters hold several small rattles that imitate the frantic sounds of a baitfish school; while others, like the Spook One Knocker, are built with a single low-pitch thumping sound that gives distant fish a clear signal to track.

When it comes to topwater retrieves, walkers vary mostly by cadence – how quickly each side-to-side move is made. Poppers, on the other hand, offer a little more variance. For starters, you can ditch the straightforward popping and go with a walking retrieve.

For popper prowess, few names rival that of Bassmaster Elite pro Zell Rowland. He, too, sees widespread applicability for the topwater game.

"I get asked all the time 'When do you like to throw a topwater bait,' and my answer is usually 'When nobody else is,'" Rowland said.

That being said, different scenarios call for different looks. For simplicity, he breaks down his retrieve options by seasonal temperature:

Warm Weather: "As the temperature rises to 64 to 70, I'll change the cadence to where I'm speeding the bait up more. I'll also make the bait spit and chug at the same time."

Hot Weather: "When the water reaches 70, 80 or 90-degrees in the summertime – especially if the water is clear – I don't like to work the bait extremely slow. I don't want to give the fish a long time to look at the bait. I want him to look at that bait and think it's a shad running, so I'll have a tendency to move that bait extremely fast, while making the bait spit and walk at the same time." 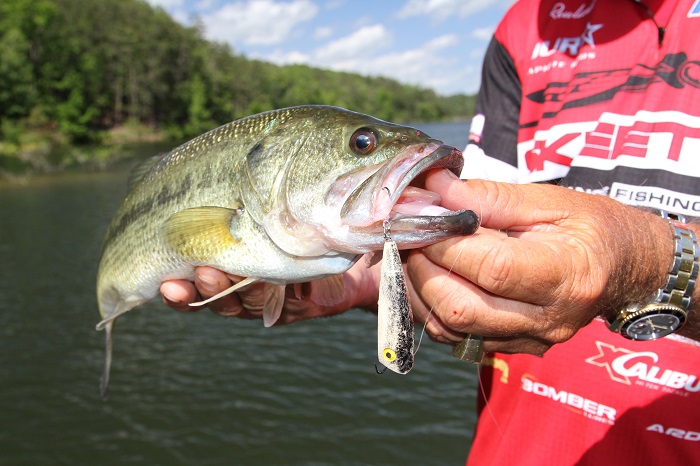 Rowland also factors wind conditions into his topwater presentations. Slick calm days allow fish to see and hear surface activity from long distances. On a windy day, however, he'll go heavy on the chugging action to maximize his chances of getting his bait noticed amid the waves.

Murray said the key to effective topwater retrieves – particularly for walking baits – is a 6'6"- to 7-foot soft-action rod. Something with the right amount of fish-fighting backbone, but sufficient flexibility is what he prefers. To confirm you have the right rod, Murray suggests this test: Tie on a topwater, shake the rod and watch the tip. Movement of about five to six-inches to either side signals the right model, he said.

"All you're trying to do is hit the end of the slack on the presentation," he said. "You're not trying to jerk the lure, you're just making it change directions. When it changes directions with a hard pop on a soft rod, it sounds like a fish striking. That sound draws fish to it."

Murray finds that the stretch of monofilament best serves his topwater action, but reel speed matters little. Control comes from the winding cadence, so topwater anglers should be able to work with a slow or fast reel. The advantage of a peppier reel comes when you need to gather slack in a hurry.

Keeping walkers and chuggers/poppers handy certainly boosts your versatility, but a deliberate one-two plan can elevate your topwater game – particularly in deeper water. When fishing solo, start off with the popper and even if that bait doesn't yield a catch, you'll very likely attract attention for the walker you'll throw next. When fishing with a buddy, you'll do well to keep both baits in the water, at least until the fish show you which style they prefer that day.

Now, keeping fish buttoned up is always a challenge with topwaters, as dangling trebles give crafty bass lots of escape potential. You can't do much but maintain a tight line on bass in the water, but keeping your fish below the surface will play well to your objective. Hold your rod angle low and don't hesitate to dunk that tip if that's what it takes to ensure your fish doesn't break the surface until cradled in a landing net.