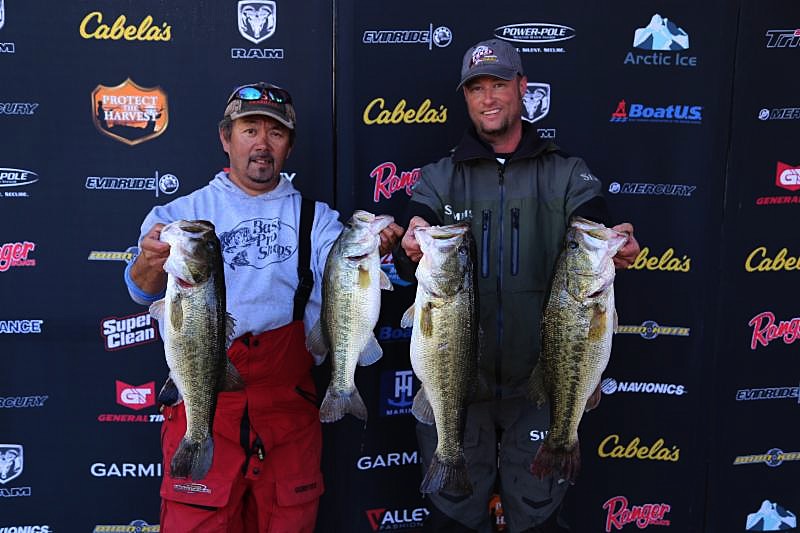 While a mild Texas winter has provided for an early-season shallow bite, recent cooler temperatures drove the bite deeper. Known as deep-water specialists, Matsubu and Mire went to work to keep up with the changing conditions. The local anglers struggled to find fish early and ultimately relied on two tried-and-true productive spots.

"We caught an eight-pounder at about 11:30 and shortly after got a 7 1/2," said Matsubu. "Then we went to the other spot and caught a four-pounder and a seven-pounder. We've been fishing these same spots for five years and we've won so much money on them. And, the incredible thing is that we still have them all to ourselves. Hopefully it stays that way for a while."

Matsubu reported that he boated three of the weigh fish and that Mire boxed two. Not surprisingly, Matsubu, a renowned jig expert, used a 5/8-ounce Talon football jig paired with a Yamamoto Hula Grub. He fished the jigs on 20-pound XPS fluorocarbon line. His best color combinations were cinnamon purple and green pumpkin. Mire employed a similarly sized Biffle Bug in watermelon.

"In January and February, I don't put the football jig down," said Matsubu. "These are staging areas in 25 to 30 feet. Both spots have a bunch of brush. There's baitfish down there and a bunch of little Kentuckys. The big largemouth are definitely eating the Kentuckys."

Matsubu explained that most of his bites came before the jig reached the brush.

"That's how it normally happens," said Matsubu. "We normally catch them five to 10 feet away."

Along with their new Stratos boat, the anglers took advantage of contingency programs to add $3,555 in Anglers Advantage cash and upgrade from a 150 hp to 225 hp Evinrude outboard.

Malcolm Franks, of Florien, Louisiana, and Ronnie Bland, of Burkeville, Texas, weighed five fish for 26.42 pounds for second place. The anglers showed up strong in their inaugural TXTT event by targeting deeper brush piles and points.

"We were throwing Carolina rigs with Ol' Monsters and Lizards," said Bland. "We caught three on those and two on 3/4-ounce V&M Cliff Pace football jigs with a Havoc Pit Boss. Normally we like to use Rage Craws as trailers, but the Havoc has more subtle action, which was what we were looking for."

Stephen Johnston, of Hemphill, Texas, and Dan Wilson, of Pilot Point, Texas, took third place with 23.47 pounds of bass. The anglers threw a Strike King Red Eye Shad, a squarebill crankbait and a Carolina-rigged lizard. The team won a total of $7,735.

The next tournament stop for the TXTT is set for Feb. 18 at Toledo Bend. The 2017 schedule includes some of Texas' most legendary bass fisheries and features huge payouts with unprecedented contingency opportunities.

For additional information, anglers are encouraged to call 210-788-4143 or check out the TXTT website at www.texasteamtrail.com. Site visitors can register for events, review the television schedule, get official Texas Team Trail gear, view results and learn more about what's in store for 2017.