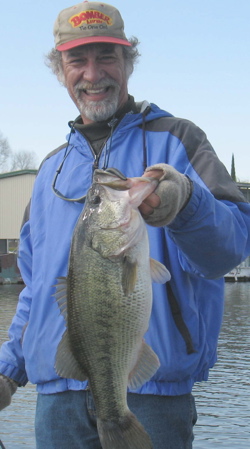 Over the last 10 years, we out West have continued to cry out, "The West has the best anglers, we can compete with those Eastern and Southern guys", "We'll kick their butts out here". Well, we sure got our chance ta do just that in April of 2003, when BASS brought their Tour Pros on a spring swing through California. Now, I think we're all standing in line at the grocery store looking for bargains on crow. We ain't as great as we thought we were.

The following is a quote from an article written by Steve Bowman over at the FishFactory.COM site. This article puts a number of issues in perspective and makes fer some good discussion. Steve's article has some great read, insights and comments from a number of anglers that ring true in many ways. Here is one insert I thought interesting, as well as took very personally:

Swindle is quick to point out that the coming event is just another tournament. But as an aside, he adds "The East Coast boys know there's something else at stake. Instead of going at 100 percent, we'll be rocking at 120 percent."

It's a level they might need. There have been three BASS Western Open Division tournaments on the San Joaquin River Delta and Robert Lee has won all of them. Lee obviously has a peculiar lock on fishing that body of water, a lock that Western anglers love to crow about.

"I think that's proof that they may not be as good as they think," Nixon said. "It would be impossible for one man to dominate any one body of water in the East. And it's not because there's not one man good enough to do that. It's because there are so many more anglers who are good enough to keep them from it."

These two Tour events, which have come to the West, have painted a clear picture in my mind. We, the Western anglers, ain't as great, as we think we are. Sure, we come up with some great, new and innovative techniques and baits. Yet, the guys across this country, fishing at this level of competition, are in a whole different class and level of fishing than the rest of us. These guys came out here and whooped our butts on the River. The West, only put 3 guys in the top 12 at the Delta. As of this writing, we're not putting on much better of a first day showing at ClearLake either. We only have 6 in the top 25. They are flat out showing us that they got what it takes, the ability to walk into an unfamiliar environment, and find the fish on their own, better than we can. Yes, we have a small number of guys, "who got what it takes". Who can in fact go on the road and compete with the best in the world. But that list is very short. For the rest of us are too inconsistent and unprepared, for whatever reason, to do so.

In my mind, the major factor to this unbalancing of the scales, in the East/South vs. West's level of competitiveness, is the fact we have been stuck on, and continue to embrace the "Shared weight" format in our Pro-Am competitions. In as much as we can sit here and justify all the rhetorical reasons as to why the shared weight is such a great format, the bottom line is, it does not prepare our western professional anglers, across the board, to git out there and be as competitive with the rest of the country's bass fishing experts who fish at that level. Who have never been exposed to this format and don't have to rely on someone else catching their fish for them. Up until this last year, with BASS bringing two events to the west, doesn't it make ya wonder or flip the light on as to why so few of our western angler's have picked up and gone out to challenge the elite bass fisherman on a national level? Doesn't it make ya wonder why those who have in the past done this, have actually picked up and moved east, moved away from family and friends out of the west, so that they can move on and compete in this arena? We truly have seen very few guys over the years, that have stood up and gone out there and proved they got what it takes. That have stood up and shown us they have the confidence and skills to go back and test these waters outside of the west and in turn beat those guys with any consistency. The list is short, very short comparatively. The rest of us are soft and timid. The results of this season's Tour clearly show this, for 2/3rds of the Western guys who did come west, only got here, because many of the anglers who beat them in the points race to git here, chose not to come west for one reason or another.

This also could very well be one reason why the west is not afforded the sponsorship opportunities that the rest of the Country's Pros do have available. Because of the shared weight format, we're unprepared, we're not getting the high results, hence we aren't getting the exposure. And back home, the sponsors do not take these glorified "team events" too seriously. Marketing their products in the "team" arena is not plausible or cost effective. Hence, the majority of our western pro's, who are out there busting their butts, get overlooked when it comes time to spread those marketing dollars around. We only have a handful of guys who are capable, the rest of em are realizing the tough road their on.

Competitive tournament bass fishing is a business, not only for the organizations, but the anglers too. It's long over due that our organizations out West begin treating these events as such and providing us with the tools and vehicles that allow us to mature and move along to greater heights. We're beginning to see this with BASS & FLW. They are bringing true competitions and national exposure to us. It's also long over due that the anglers of our community begin to stand up and git out of this humble, comfortable shell we've been hiding in and start to speak up for our future. It is stagnant out here, our hands, the hands of the anglers, are tied. We are being held back by the organizations out here who are only in this business for themselves. It's a farce that they claim they are doing what is best for the anglers, for clearly, this swing of the Tour out west proves this point, we are failing as a group. The Southern and Eastern anglers whooped out butts on our home turf, solely because they were better prepared and ARE better anglers than we are. Wake up guys, "shared weight" formats have got to go! They are killing us.