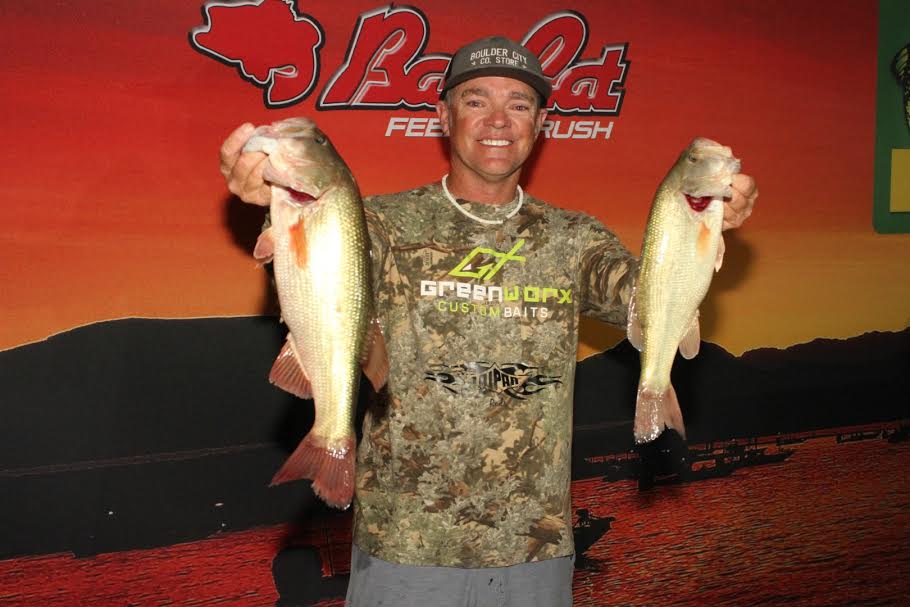 Las Vegas, Nev.  – When the smoke had cleared on one of the toughest U.S. Open Championships to date, one man stood free of the flames; that man was Tim Klinger of Boulder City, Nev., a local pro and former FLW Tour Champion who has faced fires of his own in the fickle sport that is professional bass fishing.

Klinger started the final day of the 2020 Bass Cat Boats / Mercury Marine WON Bass U.S. Open with 21.15 pounds; less than a pound off the pace set by Las Vegas’ Cody Steckel who showed consistency over the first two days, posting a total of 22.03 pounds.

Klinger started the tournament with a 7.66-pound limit on day one that found him in 42nd place for the day.  However, he brought the heaviest five fish limit of the tournament to the scales on day two; a 13.49-pound effort that included a five-pounder, to move to second place.  On the final day, when it counted the most, he posted the only double-digit limit of the day, a 10.92-pound bag, bringing his three-day total to 32.07 pounds, claiming his first U.S. Open Championship.

With that victory, he earned the $100,000 cash prize and the keys to a 2021 Bass Cat Puma FTB, powered by a 250 horsepower Mercury ProXS outboard valued at $64,000 presented to him by Rick Pierce, president of Bass Cat Boats.

Klinger was visibly moved as he was named the champion.  “I’ve wanted to win this tournament for a lot of years, and I’ve been close before, but this is especially sweet,” he said.  “To be able to win this while my Dad is still with us means the world to me; I could never win another tournament again and be happy that he got to see it.”

Klinger said that his winning combination was an 8.5-inch Berkley PowerBait curlytail worm on 5/16 to 1/2-ounce tungsten weights and a 4/0 Hayabusa worm HD Worm Hook in two colors, motor oil and green pumpkin.  He also mixed in a PowerBait Chigger Craw to add a few fish.

He spent half of the first day in the Vegas Wash area but ran to a backup area in the Overton arm.  “I found a spot that had some deep trees on it many years ago when the lake was low, and I visited it several times, they finally showed up on it late yesterday,” he said.  “I was fishing in 18 feet of water, and had it all to myself, there wasn’t a boat within a half mile of me; I still can’t believe this is real.”

Former U.S. Open Roy Hawk, from Lake Havasu City, Ariz., posted a 9.60-pound limit on day three to leap to spots to finish second for the event with 29.01 pounds, and claim $22,000 in cash.  He said he fished the Vegas Wash, targeting schooling fish early, then turned to jigs, worms and dropshot rigs to fill his limits each day.  “I used an Evergreen Showerblows and a Duo Realis Pencil 110 – both in shad patterns,” he said. “I really wanted to win, but I am absolutely pleased to finish second to Timmy; he really deserves it, and I’m really happy for him.”

The AAA division winner was Hector Gracia from Poway, Calif.  He posted a three-day total of 24.09 pounds to earn the title of WON Bass U.S. Open Champion and $10,600 in cash and prizes valued at more than $5,000.  “This is amazing to win because the U.S. Open is such a grind,” he said. “I want to thank my boaters for a great week, I lost my dad recently, this is for him.”

Second place in the AAA Division ended in a tie, Folsom, Calif. angler Westly Gritts and Kevin Burgess of Kingman, Ariz. with 23.76 pounds each.  Fourth place went to day one leader Luke Spreitzer of Phoenix, Ariz. with 23.51 pounds, and rounding out the top five was Clearlake, Calif. angler Dylan Watson with 23.32 pounds.

The 2020 Bass Cat Boats / Mercury Marine WON Bass US Open is complete. Tim Klinger the pro winner received $100,000 cash and the keys to a 2020 Bass Cat Puma FTD powered by a Mercury Pro XS 250 Four Stroke outboard valued at $64,000.  The live broadcast was presented by KUIU and Phenix Rods aired on http://www.wonbass.com.