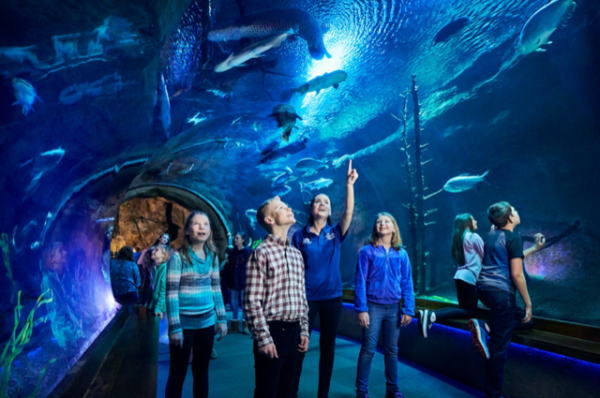 Springfield, Mo. – Johnny Morris’ Wonders of Wildlife National Museum and Aquarium in Springfield, Missouri is in the running for the title of “America’s Best Aquarium” as part of a national poll conducted by USA TODAY. Fans of the world-class conservation attraction and everyone who loves the great outdoors are encouraged to vote once per day by visiting wondersofwildlife.org/vote until voting ends on Monday, July 6 at 11:00 am CST.

The not-for-profit Wonders of Wildlife is a gift to the sportsmen and women of America from noted conservationist, angler and Bass Pro Shops founder Johnny Morris. Since 2017, Wonders of Wildlife has welcomed more than three million guests into a thrilling tour of the world’s underwater habitats teeming with 35,000 live fish, mammals, reptiles, amphibians and birds representing more than 800 species. Visitors set sail on a voyage spanning the world’s oceans, lakes and streams bringing them face-to-face with sharks, stingrays, jellyfish, eels, eagles, otters and black bears plus giant game fish from around the world that belong on every angler’s bucket list.

Wonders of Wildlife opened its doors to international fanfare in September 2017 and was the most significant gathering of conservation leaders and influencers ever assembled. The historic event convened former U.S. Presidents George W. Bush and Jimmy Carter plus celebrity supporters Kevin Costner and Mark Wahlberg, country music stars Luke Bryan, Dierks Bentley, Chris Janson, John Anderson and many more, making for a truly unforgettable event. Wonders of Wildlife was previously voted by USA TODAY readers as “America’s Best New Attraction” in 2017 and “America’s Best Aquarium” in 2018. Now, the Springfield-based not-for-profit conservation center is encouraging everyone who loves the outdoors to help claim the crown for conservation by voting for Wonders of Wildlife again this year.

“We are humbled and honored that Wonders of Wildlife has the chance to be named America’s Best Aquarium and bring enormous pride to our hometown of Springfield, Missouri and a source of inspiration to conservationists everywhere,” said noted conservationist and Bass Pro Shops founder Johnny Morris. “Wonders of Wildlife represents the collective efforts of countless individuals and organizations who share a strong passion for conservation. Together we hope that this will be a win for everyone who loves the great outdoors.”

In addition to fully immersive exhibits and a world-class collection of animals, what differentiates Wonders of Wildlife from other aquariums is its strong emphasis on conservation. More than 40 leading national conservation partners contributed to the Aquarium in Springfield, Missouri – America’s Conservation Capital – and its mission to celebrate those who hunt, fish and act as stewards of the land and water. In a world increasingly disconnected from the great outdoors, it’s more important than ever to connect people with nature through hunting, fishing and outdoor recreation. Visitors will gain a better understanding of how anglers and other conservationists are improving marine habitats in local lakes, rivers and streams to the world’s oceans and beyond.

The not-for-profit Wonders of Wildlife is the largest, most immersive fish and wildlife attraction in the world and was nominated as one of 20 leading institutions for the title of America’s Best Aquarium by a panel of nationally-respected travel experts through USA TODAY’s 10Best Reader’s Choice Awards, which celebrates elite destinations and experiences.

Wonders of Wildlife by the numbers:

·350,000 square feet (larger than the Smithsonian Museum of Natural History)

·1.5 miles of immersive trails to explore

·Partnerships with 40 of the world’s foremost conservation organizations

About Johnny Morris’ Wonders of Wildlife National Museum and Aquarium

Johnny Morris’ Wonders of Wildlife National Museum and Aquarium consists of an all-new 1.5-million-gallon Aquarium Adventure showcasing 35,000 live fish, mammals, reptiles, amphibians, and birds, and immersive Wildlife Galleries that bring visitors eye-to-eye with the greatest collection of record-setting game animals ever assembled. Created by noted conservationist and Bass Pro Shops founder/CEO Johnny Morris, the 350,000-square-foot experience celebrates those who hunt, fish, and act as stewards of the land and water. Located next to Bass Pro Shops National Headquarters in Springfield, Missouri the campus is a centerpiece of America’s Conservation Capital in Missouri’s Ozark Mountains. Wonders of Wildlife has been voted “Best New Attraction in America” and “America’s Best Aquarium” by the readers of USA TODAY. For more information, visitwww.wondersofwildlife.org.