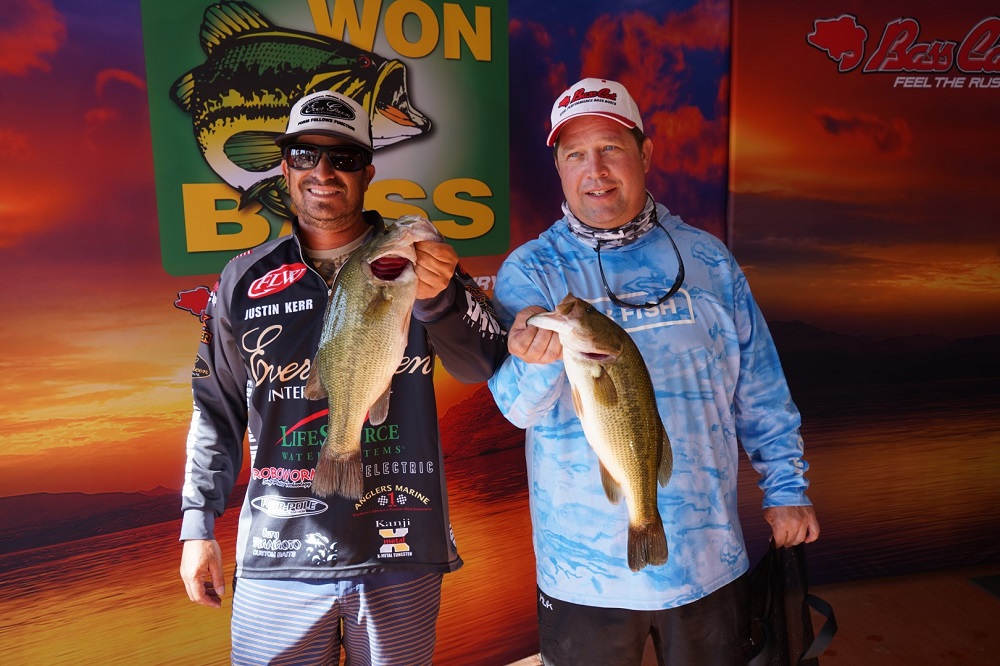 Las Vegas, Nev. – October 14, 2019 – In the days leading up to the 2019 WON Bass US Open on Lake Mead, the weather did anything but cooperate.  Strong winds kept the field of 254 pro anglers and their AAA partners confined to areas that weren’t pounded by the resultant waves.  On the eve of the 37th edition of the event, the wind laid down.

When those conditions present themselves to tournament anglers, the immediate thought is that it the fishing is going to be tough.  While the results showed that much of the field found the fishing to be difficult, someone will always find a way to put together a bite.

On the first day of the 2019 WON Bass U.S. Open, that proved to be former U.S. Open champion Justin Kerr, and his partner Bo McNeely.  Their 11.67 pound limit put Kerr in position to claim his second U.S. Open victory.  Nick Salvucci, who has been close to winning the past two years, and his AAA partner Brandon Smith came in with 11.35 pounds to end the day in second place.

Kerr, the Lake Havasu City, Arizona pro said that he just took what Lake Mead gave him. “We had an early draw today, and it took a while for the bit to get going, but when it did, we were able to put it together,” he said.  “There were a lot of boats in the area, so we had to kind of lock down in one spot and do what we could; everything just kind of worked out.”

Kerr said that his partner helped the cause.  “These events become a team event for the day, and my partner caught a three pounder that really helped,” said Kerr.  “I don’t know how tomorrow will go, but I’ll go out there and see what I can put together tomorrow.”

Salvucci said that he used a variety of techniques, in the mid-lake area to sack his day’s weight.  “I used about 20 different rods today to catch my fish; it was a junk fishing day,” he said.  “I never really knew what I was going to get bit on, so I just picked something up and culled as many times as I could.  I’ve been close the past two years, and I’m ready to see if I can make it happen this year.” He

Pro Cody Spetz and AAA Aaron Manning brought a 10.49-pound limit to the scales to finish the day in third place.  They were followed by the pairing of Jordan Collom and Dominick Mohameds finished fourth with 10.35 pounds, and rounding out the top 10 was pro Jared Lintner and his AAA partner Austin Kubica with 10.20 pounds.

The second day of the 2019 WON Bass US Open will occur tomorrow, and the pro winner will receive $100,000 cash and the keys to a 2019 Bass Cat Puma FTD powered by a Mercury Pro XS 250 Four Stroke outboard.  The live broadcast, presented by Bridgford Foods and Life Source Water Systems will bring all of the action to you from the waters of Lake Mead, the weigh-in at Callville Bay Marina, and the awards ceremony from the Railhead Room at Boulder Station Casino. All can be found at http://www.wonbass.com.