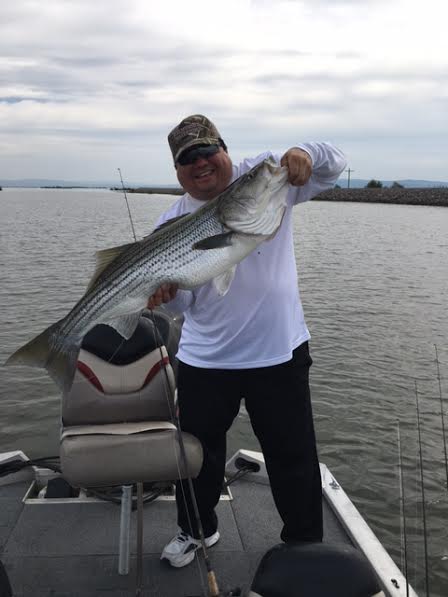 Rio Vista- Trolling is scoring many limits stripers and occasionally, a 12-15 pounder caught.  Savage Prey and P-line Angry Eye lures are key for the trolling anglers. Red White Classic Shimmer jigs around pumps getting stripers.  Shore bound anglers are scoring both species. The best place to score a striped bass or sturgeon remains Sherman Island in the area of the Power Lines, use Sardines or Red’s Bloody Eel.

Walnut Grove .   Bank anglers tossing shad and eel prevail for an occasional sturgeon or Striper those looking for bigger bites.  Drifting live baits for stripers cracking the 10 pound plus keeps anglers smiling. Trolling Savage Prey baits colors 8 to 10 foot deep is key as the spring push starts up. The Dirty “D” is clearing its name and conditions are improving. Stay in the Wimpys area for best conditions. Best bet, Savage Prey and P-line Angry Eye lures.

Discovery Bay  The Bite is On! The black bass bite has continued rolling. Biwaa  Sevens in Bluegill and RedHorse patterns rocking the Bed fish are around.  Most Blackie anglers are sticking with Senkos and Tail Slapper swim baits paired with Fatsack Swim Jigs, Wind and overcast this weekend slow rolling Fatsack Tackle blades and Rat-LTrap Echos  searching ledges near sparse tulle flats.

West Delta  The stripers are here anchovies and sardines in many areas for bank anglers, Antioch Pier and along Sherman Island rd.  Stripes to 18 pounds have  grabbed Red/White Classic shimmer jigs.  Trollers it’s getting started on both sides with Red Barn being the top choice, if they aren’t there move to the Eddo’s Side. Chartreuse patterns are the best bet.

Contra Loma – Black bass have been biting on artificial baits/lures and nightcrawlers around the lake. Try a AC Minnow wake bait or a Savage Trout fishing is still consistent on the east side, north side of lake or from a boat with nightcrawlers, Power Eggs, or mice tails.  Too many bank walkers popping Bass to 8 pounds off the beds.

Los Vaqueros Trout action best bet. They are being caught in South Cove and Oak Point as well as Cowboy Cove. The baits of choice for shore anglers is garlic scented PowerBaits, nightcrawlers or Kastmasters. Trout average a pound and a half but range to over 5 lbs. Light tackle is important for catching trout with 4-6 pound test being plenty. There was a 1000 lb DFW plant on the way. There was also a 1000 lb Lassen plant this week. With the continuing plants, trout fishing has been holding steady with more limits being caught from all around the reservoir.

Del Valle . Black Bass are on fire with anglers reporting having caught and released up to 12 bass. Most are smaller and in shallow water creating their beds. Best bet is still Senkos, either wacky or Texas rigged. Also try a plastic crawdad, on either a half-ounce, or a one-ounce football jig head. If you do catch a bass, please release it, as she maybe pregnant. Remember that by taking one bass, anglers could be taking thousands away from the lake, so please, during the crucial spawning period, release any bass caught. Trout have been active this last week. They have been in the shallow water; anglers are having good luck on Power Bait, nightcrawlers, Rapalas, mice tails and Kastmasters. Many anglers have reported catching their limits.