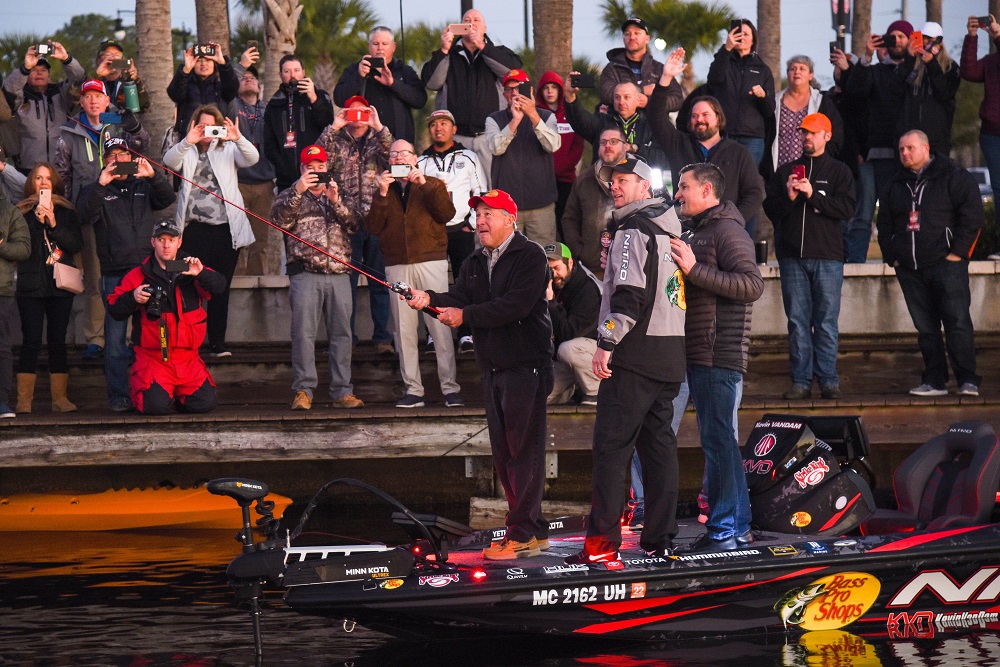 KISSIMMEE, Fla.  - The ceremonial first cast to start the new Major League Fishing (MLF) Bass Pro Tour was made today when Bass Pro Shops founder and CEO, Johnny Morris, tossed a lure into Florida's Lake Toho.
It was a symbolic opening by the event's Grand Marshall as he stood alongside longtime friend and MLF angler Kevin VanDam in the pro's Nitro Z21 boat, on a day that promised sunshine ahead for the fishing, the anglers and the Bass Pro Tour.
VanDam and the 79 other competitors beamed proudly because the moment was a dream come true for the group that longed for a competition series in which they had control of the rule-setting and their own destiny.
Morris was instrumental in MLF's fast-moving evolution that resulted in the formation of the Bass Pro Tour. Announcement of the new tour was made just last September, so a lot of things had to happen fast in order to make the season a reality in the short period of time between then and this point in January.
But Morris has been breathing new life and light into fishing ever since he started Bass Pro Shops in the 70s.
"Johnny's appearance and participation today says so much about his commitment to the sport of fishing and our industry," said MLF President and CEO Jim Wilburn. "This is a giant day for anglers everywhere and it's exciting to think it's just the start of so many good things to come, including introducing fishing to a broader audience that likely will inspire people who have never fished before to give it a try and the knowledge for how to do it."
The Bass Pro Tour event on the Kissimmee Chain of Lakes, Jan. 29 - Feb. 3, brings many activities that can be enjoyed through live stream programming, as well as on location at the Lake Toho Marina.
The day's fishing concludes with the all-new MLF Post-Game Show that is open to the public and features a drive-through interview with anglers using their boats and rigs as the stage. It begins 5 p.m. ET at the Lake Toho Marina, 69 Lakeview Drive, Kissimmee, and lasts for about two hours.
The public is also invited to attend the Bass Pro Tour Midway at the same location, a setting that will include a variety of activities ranging from boat demo rides to interactive displays at sponsors' booths. Midway hours are 9:30 a.m. to 7:30 p.m. daily, with the majority of activations taking place over the weekend.
All fans will have free access to follow the Bass Pro Tour action throughout the event on the league's live stream program, MFL NOW!, which provides real-time coverage during the competition days beginning about 10 a.m. ET. daily.
For more information on the MLF Bass Pro Tour and its schedule, anglers and rules, visit www.majorleaguefishing.com.
###
About Major League Fishing
Developed through a joint effort between Outdoor Channel and the PBT anglers in 2011, Major League Fishing brings the high-intensity sport of competitive bass fishing into America's living rooms in the form of riveting two-hour TV episodes. World-class anglers are filmed over the course of a six-day event. The show captures their efforts as they utilize a demanding format that allows them to weigh all the "scorable bass" they catch. Unlike other competitive fishing events, live leaderboards in the boats allow anglers to know their standings at all times. For more information about the game, visit www.majorleaguefishing.com and follow Major League Fishing on Twitter, Instagram and Facebook. You can catch all current and past episodes of Major League Fishing on #MyOutdoorTV, the world's leading outdoor television global, streaming service provider. Also, for more information about MLF anglers, see Game & Fish magazine, the official publication of MLF.