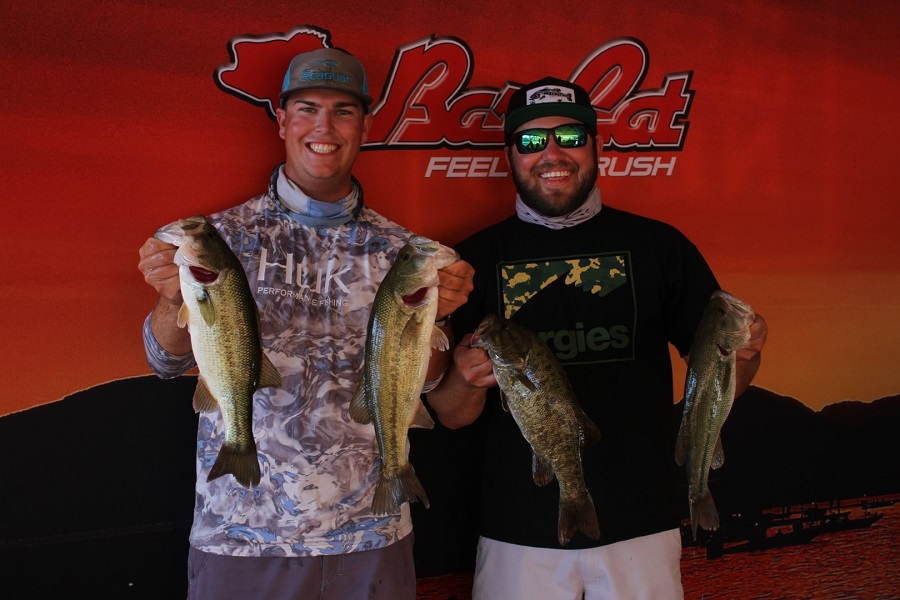 Las Vegas, Nev. – The WON Bass U.S. Open has a reputation of being the toughest tournament in the country. A look at the history of this event at Lake Mead will show that 11 pounds a day will give an angler a shot at claiming the U.S. Open title most years.  With a second consecutive solid performance at a stingy Lake Mead, Cody Steckel placed 10.59 pounds on the scale to back up his 11.44-pound day one to take the lead with 22.03 pounds heading into the final day.

He will have his work cut out for him to claim the trophy, as noted desert legend and two-time FLW Tour Champion Tim Klinger from Boulder City, Nev. is hot on his heels.  Klinger posted the biggest limit of the event thus far with a 13.49-pound performance that put him in second place with 21.15 pounds; less than a pound behind the leader.

Steckel, who landed in second place yesterday, said that he was able to fish the same areas as day one, however, the day did not develop as quickly.  “I had my limit by 11:00 yesterday, but didn’t get a bite until 10:00 today,” said Steckel.  “I was able to work around and find them again, but it took a little longer.”

The Las Vegas based angler said he felt good about his chances, however.  “I feel like my area has enough fish to finish this tomorrow,” he said.  “I think I can go out there and grind out what I need, 11 more pounds and I think I can do it.”

Klinger, who posted a little over seven pounds on day one, said that he fished the same areas both days.  “I’m making a fairly long run, so I’m committed to the area,” he said.  “I made three stops on a spot I caught two pounders on yesterday, and on my third visit, the big ones were there.  I really think I can pull another good sack out of there tomorrow.”

Former U.S. Open Champion, Roy Hawk caught another 9-pound limit on the board to bring his total to 19.21 pounds, within two pounds of claiming his second title.  “I’m fishing fairly close to takeoff, so I’ll have plenty of time to fish,” he said.  “I feel like I have a chance, anything can happen.”

Rounding out the top five in the pro division were David Baca with a two-day total of 19.01 pounds and Carl Limbrick Jr. stands fifth with 17.65 pounds.

On the AAA side, Dylan Watson tops the field with a two-day total of 19.94 pounds. Westly Gits placed second with 19.64 pounds. He is followed by Steve Boyce in third place with 17.66 pounds.  Fourth place went to Kyle Charles, who moved up one spot to fourth place with 17.52 pounds. Rounding out the top five is Hector Garcia with 17.46 pounds.

The final day of the 2020 WON Bass US Open will occur tomorrow, and on the final day, the pro winner will receive $100,000 cash and the keys to a 2020 Bass Cat Puma FTD powered by a Mercury Pro XS 250 Four Stroke outboard valued at $64,000.  The live broadcast, presented by KUIU and Phenix Rods will bring you the weigh-in at Callville Bay Marina, access the activity at http://www.wonbass.com.