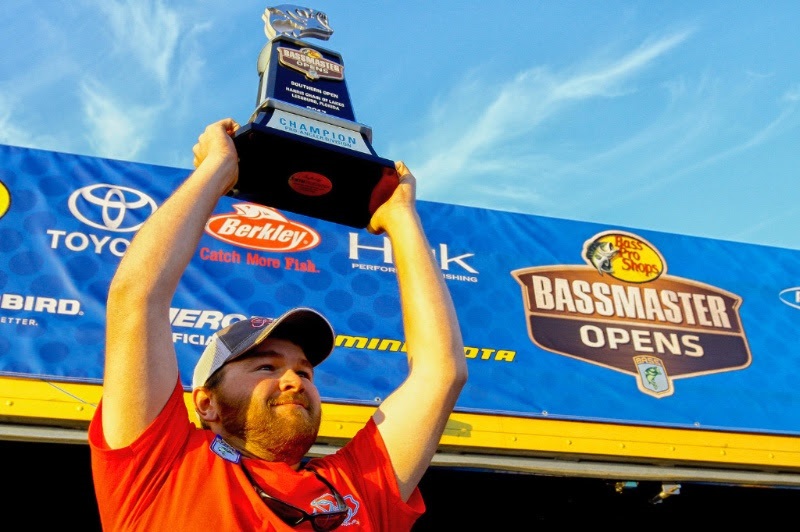 Jesse Wiggins of Cullman, Ala., wins the Bass Pro Shops Bassmaster Southern Open #1 held on the Harris Chain of Lakes in Leesburg, Fla. Wiggins brought 21 pounds, 5 ounces to Saturday's weigh-in, giving him a three-day total of 59-4.

Photo by James Overstreet/Bassmaster
LEESBURG, Fla. — If Jesse Wiggins is going to keep winning fishing tournaments, someone is going to have to put a rush order on his pro fishing jersey.

While most professional anglers are outfitted in fishing jerseys adorned with more patches than you can count, the Bassmaster Elite Series rookie sported a plain red T-shirt Saturday when he climbed from fourth place to the top spot in the Bass Pro Shops Bassmaster Southern Open No. 1 on the Harris Chain of Lakes with a final-day catch of 21 pounds, 5 ounces.

Wiggins’ three-day mark of 59-4 was just over a pound better than that of second-place finisher John Pollard (58-1).

In many ways, Wiggins’ simple red T-shirt was symbolic of his meteoric rise in professional fishing — it’s straight talk, and no frills. The clothing choice was even more appropriate though, considering the only insignia on it (besides a B.A.S.S. patch) was a Jenko Fishing logo.

Jenko is the maker of the crankbait Wiggins used to win the first Bassmaster tournament of the 2017 season. For the 27-year old Cullman, Ala., native, it was his second Opens victory in 10 months. His first came in last year’s Southern Open on Alabama’s Smith Lake.

“I expected to win that one on Smith Lake (close to home,)” Wiggins said to the crowd gathered at the Orlando Bass Pro Shops for the final weigh-in. “This one, I had no idea. I’m shaking like a leaf on a tree up here.”

Wiggins earned a package, including cash and a Nitro boat valued at $51,400 for his victorySaturday. He also claimed a spot in the 2018 GEICO Bassmaster Classic presented by DICK’S Sporting Goods with the victory, which is the first berth awarded for the event this season.

During Saturday’s final weigh-in, Wiggins was in the Hot Seat and was waiting for Friday's leader and Elite Series pro Justin Lucas to bring his bag to the scales. Lucas feigned that he might have a bag big enough to supplant Wiggins in the top spot, but he only had 9-9, which left him in fourth place overall with 53-2.

That made Wiggins’ Saturday limit of 21-5 not only the largest of the day, but the eighth-heaviest of the entire Southern Open. Combined with his weights on the first two days (17-5 Thursday and 20-10 Friday), it was more than enough to win.

“It’s a great bag to finish with and a perfect way to start the season,” he said. “I’m absolutely speechless.”

Wiggins found several spots that held quality bass using his Lowrance electronics during practice. But when most of his competitors were either working grass beds or trying to sight fish for spawning females on beds, Wiggins turned to the Jenko crankbait in the deepest areas of Lake Eustis — about a 15-minute run from the launch point in Leesburg’s Venetian Gardens.

“I was using a jighead with a worm,” he said. “It was a shaky head 6-inch finesse worm in green pumpkin on the first day, and I got some good bites. Then I’d go to the Jenko CD20 in citrus shad. That crankbait was the key. In shallower stuff, I’d throw the CD15. The fish were both on top of the drops and right below them. I was fishing in about 20 feet of water, looking for drops.”

Wiggins said going with fishing styles (cranking, floating worms) he uses back home in Alabama was important. While he admitted the techniques might be unusual during the beginning of the spawn in central Florida, they are the ones with which he is most comfortable — kind of like the red T-shirt.

“If I have one word of advice, it’s always bring with you something you know from home,” he said. “I’m used to cranking on the Tennessee River at ledge fish, and I’m used to throwing a worm on Smith Lake. I used both here. You don’t always win, but I knew that if I found the right stuff offshore, no one else was going to be doing it and I’d have it all to myself.”

Wiggins said the Opens victory was the perfect start to a season that will include his debut on the Elite Series next month on Tennessee’s Cherokee Lake.

“I never figured it would happen this fast,” he said. “This just blows my mind. I just wanted to survive. This means so much to my career. It’s hard out there trying to get the sponsorship money.”
Which leads us back to his pro jersey.

Fred Rigdon of Belleview, Fla., won the co-angler division with a three-day total of 26-11. Co-anglers were allowed to catch three fish per day. Rigdon won a Nitro boat package.