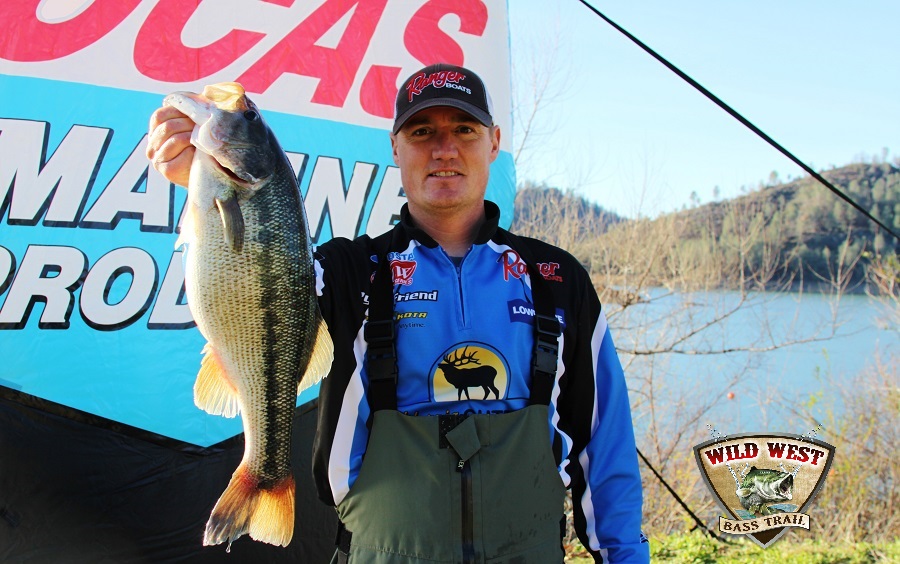 Ryan Friend of Oroville, Calif. took a sizeable lead over the 133 pro angler field on the first day of the Wild West Bass Trail Super Clean Showdown season-opener on Lake Shasta, bringing in a five-fish limit of 18.55 on Friday, January 27.

REDDING, Calif. - Leading by three-pounds, Friend made the feat seem like a simple task. “I got two key bites in the morning, two more mid-day and one in the afternoon,” he said as he held up his big fish contender – a 5.75 spotted bass.

Sitting in second for the pro side with 15.55 was Sage Baker of Shasta, Calif. Baker’s bag included the biggest bass weighed on Day One at 6.86. “I got about 25 fish today, mostly mid-day on reaction,” revealed Baker. He stated he felt moderately confident about continued success.

Rounding out the top-3 pro anglers with 14.84 was the 2015 U.S. Open champ Roy Hawk of Lake Havasu City, Ariz. His full five-fish limit held the second biggest bass at the scales for the day at 6.24. Hawk found the bite better later in the day and found he had to adjust to keep getting bit. “I had to change it up, running a little deeper and going a little slower for a while,” he explained.

The WWBT Super Clean Shasta Showdown will continue on Saturday, January 28 with the full field once again battling to earn a spot among the top-10 on their respective side, to secure a third and final fishing day.

Sunday, January 29 will mark the last day of bass catching with each of the top-10 pros and top-10 co-anglers running their own boat in a format that pits pro against pro and co against co. The daily weights of each anglers are combined for all three competition days for a tournament total that will determine both a WWBT pro and co-angler champion.

A live stream of the daily weigh-in is avaiable beginning at 3 p.m. at the Wild West Bass Trail website or at WWBT Facebook page.

The co-angler field was led by Nicholas Day with 11.69. Day’s five-fish limit also held the big bass of the day for the co’s with a 4.05.

Daily Blast off and Weigh-In

WWBT Shasta awards will be presented after the top-10 weigh-in on Sunday, January 29.

Blast off and weigh-ins are free of charge and open to the public. Fans can cheer on their favorite fishermen and hometown heroes as part of the WWBT fully-televised event to air on Fox Sports and the Pursuit Channel.

The public is invited to the event from 12 p.m. – 3 p.m. daily for a meet-and-greet with the West’s all-time leading money winner – Gary Dobyns, a Ranger Boats display and free on the water Ranger Boats/Evinrude motor demo rides are available.

For 2017, the WWBT will conduct 16 events that include one Pro/Am circuit and two Teams circuits – one based in California and the other in Arizona. The Pro/Am circuit consists of five tournaments throughout California and Arizona and a year-end, qualifying championship event. Each Teams circuit includes four tournaments and a year-end, qualifying championship. For more information visit WildWestBassTrail.com and follow WWBT at Facebook, YouTube, Twitter, Instagram.