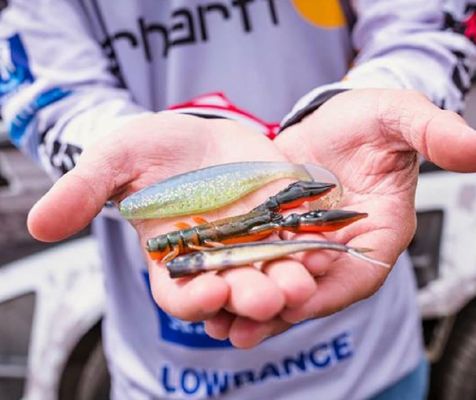 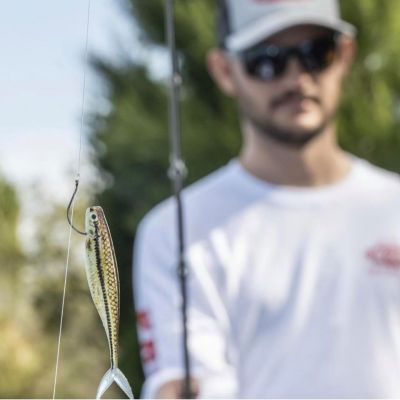 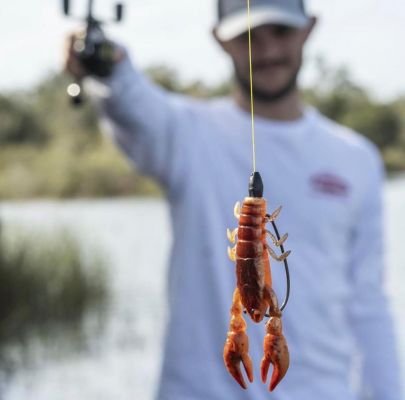 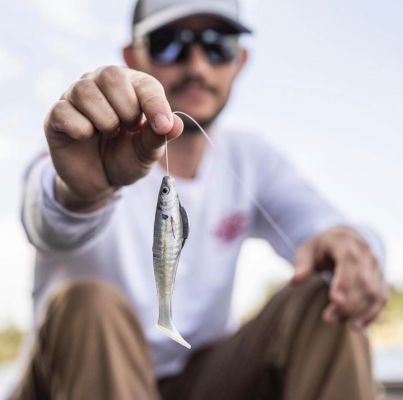 Over the past few years, Jordan Lee has been one of the top professional anglers. Two Bassmaster Classic titles and a win in the inaugural Bass Pro Tour event show that he can win big events. His nickname has become “The Champ,” and there are now three different soft plastics from Berkley with this moniker.

The Champ Minnow, The Champ Craw, and The Champ Swimmer are the three new baits that just arrived at shows.

Lee shared some info about each of the lures, how he fishes them, and some of his favorite colors for different situations.

This baitfish imitator was designed for fishing on a drop-shot, according to Lee. It has a minnow profile, forked tail and what makes it unique is that the fork is vertical instead of horizontal. This was all part of the plan, Lee said as he described the baits.

“I wanted a bait that you can nose-hook and fish for smallmouth and spotted bass on a drop-shot, but it also works great a few other ways,” said Lee.

What he likes most about it is the action that it produces.

“It stands up great and sticks straight out. It is really good in current when rigged on Size 1 Berkley Fusion19 drop-shot hook,” he said.

Besides fishing on a drop-shot, he’s had success with it on a Scrounger head and has plans to use it for another technique.

“I have been catching them with it on a 3/16 and ¼ ounce Scrounger head,” he said. “I am also going to use it for the ‘Damiki Rig’ when fishing vertically. It will be perfect for that.”

When asked about colors, he said Smelt or HD Round Goby is an excellent choice for clear water, and he likes Black Shad and Pearl White for his Scrounger heads.

This lifelike craw imitator has plenty of uses. Lee said one of the best is when fishing for spawning bass. “It is awesome for bedding fish because of how it looks and how the claws stand up,” said Lee.

“The other way I have been using it is punching. You can also rig it on a heavy Texas-Rig and just cast it to cover. It was designed for those two techniques, but it is a versatile craw bait,” he said. “It will also be good on the back of a jig because it has claws that stand up and you can bulk up your jig because of how thick the bait is.”

Like the Champ Minnow, it comes in several great realistic colors. Lee is partial to Yummy Craw because of the orange on the belly, and he also said the HD Red Craw has a nice red tint that makes it good for punching mats.

The final bait in the new lineup is a 4.6” swimbait that Lee fishes both solo and as a trailer.

“I have been fishing it on a jighead and also on a belly-weighted EWG hook. The flat top of the bait helps it sit straight on the hook, and you can fish it pretty quickly, and it won’t roll like other swimbaits,” shared Lee. “When you slow roll it, it looks really good as the boot tail kicks.”

Lee has also found himself using it quite a bit on the back of a swim jig, which is something he didn’t initially design it for. “I thought it would be a little too big, but it is a great size for a trailer. I like how it thumps in the water, and the whole jig shakes side to side,” he said. “The 4.6” size is a great all-around size for however you want to fish it.”

When fishing a white-colored swim jig, Lee says the HD Gizzard Shad is a nice match and when fishing a Green Pumpkin color jig, the Green Pumpkin or HD Bluegill pair perfectly. “All of the colors came out great, and they are super realistic. They have a color to match just about any situation and forage,” said Lee.

All of the baits listed above use Berkley’s proven PowerBait formula that bass hold onto 18-times longer than other plastics. The list of colors includes realistic, HD colors that match all of the common forage for bass across the country.

Jordan Lee has had a meteoric rise to the top of professional bass fishing and with that success comes the ability to create signature series products for his sponsors. The Champ Minnow, The Champ Craw, and The Champ Swimmer are three of the first products he has developed in what could be a whole series of baits designed precisely to his specifications.