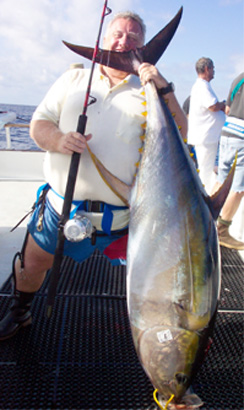 Big Tuna Bill: It was a small tournament at the Hotel Buena Vista Beach Resort several years ago that "Big Tuna Bill" won with a 151 pound yellowfin tuna. The angler with the 2nd place tuna, just 5 pounds lighter than the winning fish, grudgingly acknowledged the catch by saying "That's a big tuna!" and looking at Bill he said, "From now on, I'm calling you Big Tuna Bill!"

But, that's not the only big tuna Bill has landed. The largest was a 450 pound bluefin tuna, followed by a 350 pound bluefin caught within ten miles of Morehead City, NC a few days before Christmas in 2004. The second largest was a 252 pound fish taken outside of La Paz, Baja California Sur, Mexico. "We were at a spot called the Ocho-Ocho or 88 bank by Cerralvo Island on a private yacht and this fish was in a school of much smaller tuna. He ate a marlin lure and it didn't take long to bring him to the boat. One of my favorite big tuna was caught at four o'clock in the morning on the Red Rooster III. I dropped a blue and chrome fluorescent Tady 15 heavy jig straight down over the side and at about 30 feet, as it was dropping down I got bit. An hour later, I had a 189 pound yellowfin on the boat." On another Red Rooster III trip in November 2004 Bill caught a yellowfin tuna that weighed over 200 pounds. Since then BTB has landed several more 200 lb plus yellowfin including one weighing 235 lbs. (BTB lifetime over 200 lb tuna: 5 yellowfin 202 - 252 lbs & 1 bluefin at 450 lbs. - and still counting!!)

Big Tuna Bill is a fan of "long range" fishing out of San Diego. These trips are the ultimate in tuna fishing. Living for fifteen days or more aboard 100 foot + luxury fishing boats designed to provide the ultimate in fishing comfort for 20 to 30 anglers, they travel and fish for huge yellowfin tuna and wahoo at legendary locations such as the Hurricane Bank, almost 1,000 miles south of San Diego. "The boat I fish on, Red Rooster III, is like a floating hotel. They have stateroom accommodations and provide everything you need to prepare you for the fishing experience of a lifetime. I'm hooked!"

It has been a lifetime of fishing for Bill and his first big tuna was caught off Southern California near Catalina at the legendary tuna spot, the Tanner Bank. "I was just 16 years old and we were fishing for albacore. In those days we fished with 36# braided nylon line with a wire "live bait" leader. I don't know how I got bit using that set up but I was lucky enough to land a 180 pound Allison Tuna. Well, that's what they called the big yellowfin with the sickle fins back in those days." But it's not only tuna that "Big Tuna Bill" hunts. At the age of 16 he was one of the youngest marlin captains in the Newport Beach private yacht fleet. Right after that, Bill started a love affair with Baja, California. He has caught Totuava in San Felipe; Yellowtail, Dorado and Sailfish in Loreto; Black Marlin, Blue Marlin and Striped Marlin along with Tuna, Wahoo, Roosterfish and other inshore species in La Paz, East Cape and Cabo San Lucas.

"Big Tuna Bill" Ghiselin, Saltwater and Baja California fishing expert and host of Rod and Reel Radio, on AM 540 in Los Angeles and San Diego and AM1050 in San Bernardino, Riverside (The Inland Enpire). 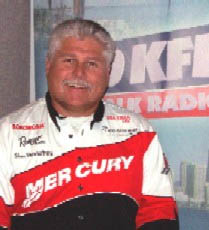 Stan Vanderburg: Large Mouth Bass. Just the name causes a tingle up the spine of any fresh water angler. Just say the name "Bass" in Stan's company and you're in for a long conversation. "The Tingle... Yeah, I get it, then it goes to my arm, as I think of the shiver of a rod when a big one's shaking it's head that really gets me going. I love catching Bass."

Large Mouth Bass are Stan's passion and specialty. Stan sits among the elite in Southern California's professional Bass fishing Community. Stan's insight and knowledge have been built over 23 years of Professional Tournament Fishing and as a consultant to many companies who specialize in Freshwater Bass Angling. The list of Stan's Sponsors and Professional & Civic Associations is impressive and supports his well-deserved reputation as a top-class Freshwater Bass Angler. Stan is a resident of Southern California, where the man-made reservoirs and lakes hold wonderful populations of healthy Large Mouth Bass. Today Stan fishes selected local and regional tournaments, but most enjoys the work he does with various tackle companies, helping to develop better ways for every angler to be more successful, and especially the work he does on Rod and Reel radio, sharing his knowledge with the recreational fisherman, and of course, spending his time on the water, with his friends.

Stan Vanderburg: "I spent years fishing tournaments. I reached the point where It wasn't about catching fish any more, but about beating the other guy. I didn't like that. So, now I may fish a selected tournament, but I enjoy spending my days out on the water with my friends, just having fun, catching Bass."